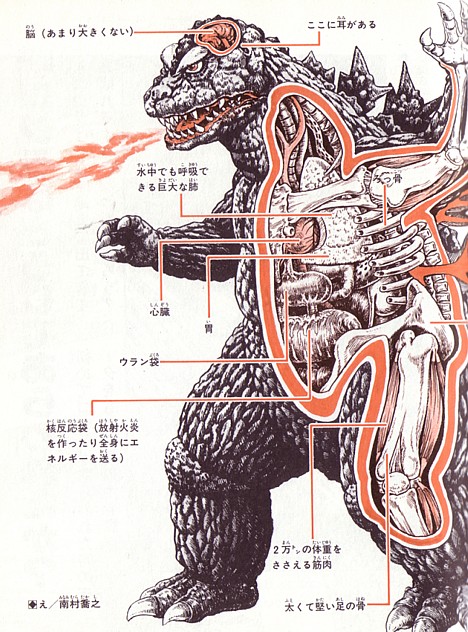 My hero growing up was Godzilla. The first movie I vividly remember watching was 'King Kong vs. Godzilla'. From there my tastes spread to the monsters at Universal with 'Creature From the Black Lagoon', 'Dracula', 'Frankenstein', and 'The Wolf Man'. However, I was a bigger fan of Universal's other Monster films like 'Tarantula', 'The Deadly Mantis' or 'The Land Unknown'.

Through my father, who introduced me to this crap, I learned about the Big-Bug movies of the '50s, and about Kaiju films from Japan. Seeing giant sized creatures attacking buildings, destroying cities or the off chance of saving humanity can make for a fun movie. Recent efforts like 'Cloverfield' show that films with giant monsters can still sell.

Films featuring giant animals and mutated dinosaurs tend to not have the best reputation in terms of quality. Both Godzilla and Gamera have been mocked on 'Mystery Science Theater 3000', and many studios will shell out a quick rip-off flick if they think it could make a dollar. Looking at you Asylum.

These are the best examples, to me, of giant monsters in the movies. Some are as big as buildings, but all are bigger than any real life counterpart.

'Rodan' is a film that gets a little over looked nowadays in comparison to its other Japanese counterparts. 'Rodan' was a big hit over here in the states a few years after it's initial '56 release, albeit edited to all hell, and a young George Takei doing voice work. *Spoiler Alert* The ending is one of the most tragic in giant monster films. One of the two Rodan falls to its death inside an erupting volcano, and the other, not wanting to live without its mate, dives to its death. Romance.

Jason and I were two of possibly 20 lucky winners to see 'Eight Legged Freaks' at an advanced screening sponsored by WAAF in Boston back in 2002. The film wasn't a big success in theaters, but it's a great ride with a loving respect for the films of the '50s while still being relevant. Good supporting cast (a young Scarlett Johansson), and solid effects allow for the film to move past "so bad it's good" to just "good"

Much like 'Eight Legged Freaks', 'Tremors' is a film that knows its base and its audience. Taking a great setting like the Nevada desert, and adding a subterranean menace all adds up to a real fun time. The cast being rounded out by Kevin Bacon, Fred Ward, Michael Gross, and the always awesome Victor Wong is great. The special effects are practical, and leads to great reactions by the cast. The script adds humor to the terror, and that is why 'Tremors' still works to this day.

One of the films that got me hooked on the genre, 'Tarantula' features effects that were unusual for the time. Many crews were working with Stop-Motion Animation, Suitmation (Rubber Suits), but 'Tarantula' used real footage of real animals. What really makes the story of 'Tarantula' a compelling one is that the monsters creation was meant for good, not evil. Like most of director Jack Arnold's films, he portrays the monster in a sympathetic light. The creature is just doing what it would normally do, we humans on the other hand are the true monsters.

A lot of the time films based on urban legends are fucking awful. Thankfully, the story of an alligator flushed down the sewers, and growing to 30 ft. long by eating lab animals is fantastic. Great acting by Robert Forrester, the alligator effects are awesome, and the film is the first of two films on this list to show a child being eaten on screen. Doesn't happen too often as people are easily offended. Pussies.

'THEM!' is well known from being the first "Big-Bug" film of the '50s. The film was a reaction to the development of the nuclear age, and man does it show. It's a well done film with a murder mystery opening, and a monster movie finish. It really sets the movie apart from any others in its genre. The special effects were very advanced for the time, and that was one reason 'THEM!' was a success for Warner Brothers.

While 'The Lost World' in 1925 might have been the first film to utilize stop-motion animation for it's beasts, it wasn't until 'King Kong' in 1933 that it was shown what could really be done with the art. The film is easily one of the finest examples of early American film, and still holds up well today with great acting, phenomenal effects by Willis O'Brien and a fantastic score all add up to a great piece of classic film-making.

It was hard to pick only one Ray Harryhausen film to put on this list, but man, this is easily his best work. In what would set the bar for 1950's Science-Fiction, 'The Beast from 20,000 Fathoms' really sells its creature. Utilizing a short story by Ray Bradbury, the film took inspiration from the Atomic Age, and awoke the beast with a nuclear blast. It's a concept that was used over and over again throughout the next decade or so. Harryhausen is the master of stop-motion animation, and this film proves it.

'Jaws' was the first real blockbuster in the truest sense of the definition. The shark is massive, but is so well shot that you aren't sure just how big it is for the first 3/4 of the film. Spielberg took what could have been camp like a lot of films of the past 25 years, but made something truly shocking. Every giant animal movie after 1975 owes huge credit to everything that was accomplished with 'Jaws'.

For over 50 years Godzilla has been a staple of pop culture. Appearing in films, comics, music and anything else he can stomp on. Countless foes have tried to stop him. Countries have tried to destroy him. While not every film in the Godzilla catalog is fantastic, there are some shining examples that are great for a casual Kaiju fan. The original is a good one to start out with, but I do suggest seeing both the Japanese original cut, and the bastardized American version. Each offer something different while using the same basic story. From there I suggest 'Godzilla vs. Biollante' (1985), 'GMK: Giant Monsters All-Out Attack' (2001), and 'Godzilla vs. Destroyah' (1995)

Honorable mentions: The Valley of Gwangi, Mosquito, The Great Alligator, Orca, Empire of the Ants, Spasms, Mothra, It Came from the Beneath Sea.
Posted by Chris at 5:31 PM