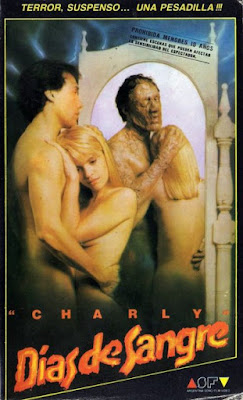 Over the past five or six months I've been really going on an "obscure to me" movie kick. Now, when I say "obscure to me" I really mean that these are films that barely have mention here in the United States. Every country produces movies for their native audiences each year, but only a portion of those actually find worldwide distribution. I'm sure even more films were made for the video market that had never dreamed some American kid would give it a view, but here we are. 26 years later, and here I view some supernatural slasher I'm sure the people in Argentina have forgotten about.

Charly, Dias de Sangre tells the basic story of Danni and his cousin, Charly. Charly has been having a tough time at school, and has been very introverted since the death of his brother when they were kids. Charly's uncle hopes to get him out of this mental slump, and asks Danni to try and get a lady for Charly. After getting some friends together, Danni and Charly bring them to Charly's family cottage off in the woods.

As the evening progresses Charly becomes smitten with one of the girls, and the two talk for the whole night. But they're not alone, as an unseen, heavily breathing entity is stalking the teens in the shadows. Soon truths are told about the house, and no one will be safe.

Charly, Dias de Sangre is a pretty routine slasher, but there's enough here to keep even the most seasoned gore hound watching. The opening sequence is the strongest in the film, but there's a decent enough flow to keep your attention throughout. While you're probably not going to recognize any of the Argentinean actors here, they all do their part in helping progress the story. Not any one of the actors particularly stands out, but they're serviceable fodder to get the "Days of Blood" the title promises.

The movie does suffer when it comes to actually laying out a cohesive story. While we are given background in regards to the death of Charly's brother, it feels as if there's portions of the script that were tossed out, or sequences of the movie that were deleted as if to make less sense. The film just kind of ends and we're left scratching our heads trying to figure out if anything truly supernatural was going on, or if Dias de Sangre is a look at how someone deals with grief. Probably not the later, so we're just going to say this is a daft slasher played up for the video market.

With a brisk 75 minute run time and barely a lick of character or plot development, Dias de Sangre is one movie to throw on if you're just looking for mindless gore and scantily clad women.You won't see anything truly original here, but to be honest it shouldn't affect your enjoyment. There are far worse slashers that have received theatrical distribution here in the USA, so you'd be doing better to watch Dias de Sangre than the recent releases from any major studio.

**This version is missing the first 2 1/2 minutes of random girls taking a topless bath.**