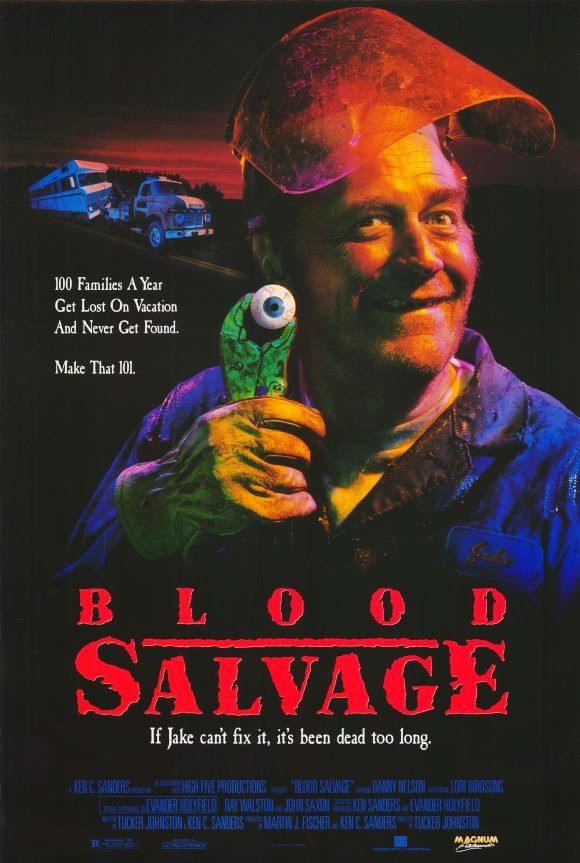 As my years of watching and collecting movies progresses I find myself taking less of a chance on a "blind buy" as I used to. Recently I came to the conclusion that reasoning is completely stupid, and if I'm not willing to stick my neck out on some ridiculous movie (new or old) then what type of movie fan am I really? The answer is a shitty one.

To correct this genuinely lazy mistake I've taken to seeking out a few movies that I had never heard anything about, good or bad. Just crossing off more movies to say it's worth a look, or its Curse of the Blue Lights bad. This morning I gave the 1984 flick Dreamscape a watch, and that was pretty damned entertaining. Don't know why I never saw it before, but better late than never. In the same lot of tapes I decided to pick up this silly cover of a junkyard worker holding an eyeball in wrench.

Blood Salvage tells the tale of the Evans family, who attend a county fair in which their wheelchair bound daughter April is a contestant. Jake, a local junkman, takes a shine to miss April, and sets about to have his insipid sons conspire to damage the wheels on the Evans' Winnebago. As the family embarks on their trip back home the wheel magically comes undone, and the camper veers off-road. Along comes Jake to "assist" the Evans, and brings them all back to his home. Unfortunately for the Evans what they don't realize is Jake is a mad doctor who just so happens to be sell the organs on the black market!

Blood Salvage is an absurd movie; let's get that out of the way first. If you're expecting a thought provoking chill fest you're shit out of luck. This is a movie played strictly for laughs, more in the vein of Blood Diner than Hills Have Eyes. The company who released the film, Magnum, has not been my best friend when it comes to quality views. I keep beating the dead horse that is Curse of the Blue Lights, but then there's also the shit-show that is Street Asylum. After viewing those two films I was a bit reluctant, but I'm happy I did. This was the simple, no nonsense type of horror comedy I like. Not as heavy on the slapstick, but black humor in the dialogue and absurdity of the overall situation. The gore was also a fun aspect here, but not played for anything more than comedy.

Another aspect of Blood Salvage that elevated the viewing for me was the inclusion of some familiar faces in John Saxon as the patriarch of the Evans household, and Ray Walston as the seedy head of the black market organ trade Mr. Stone. The rest of the cast is more than acceptable, but my main gripe with the film comes in how predictable the whole thing was, right down to the last scene. Perhaps I'm just too jaded from seeing so many movies. I guess it's easy to blame myself, but honestly, maybe everything was predictable for the sake of adding levity to the plot. That's all a personal thing, and doesn't really detract from the viewing, but something I felt I should share for those who watch a lot of horror movies.

For those of you who look for something a little sillier in your upcoming horror viewings, I suggest giving Blood Salvage a watch. With an engaging plot, solid acting and great gore you’re sure to enjoy it. There are a lot of other crazy backwoods killer movies out there, but due to the humor involved with Blood Salvage I would say it’s one that holds up on repeat viewings more than most. Also, lookout for the random fucking cameo from Evander Holyfield. This must have been some paycheck, champ.

Blood Salvage is currently not available on DVD, but copies of the VHS are available on Amazon starting at around $10.