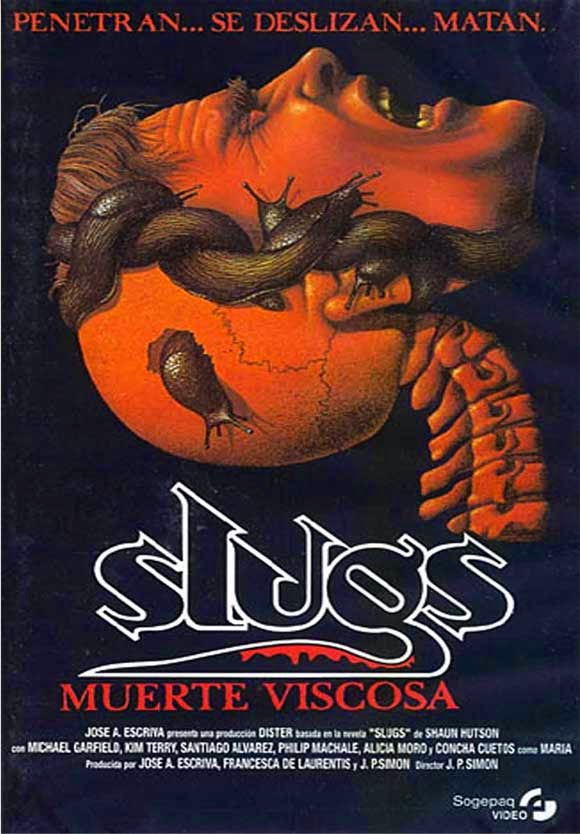 If there's one thing to learn from Steven Spielberg's 'Jaws' it's that producers love to steal ideas. The amount of giant killer animal, and nature takes revenge films that came out after the summer of '75 is absurd. There are some stellar examples of films that understood what their "stories" were, and tried to make the best of it.

As is the case with any sub-genre you're often left with more bad than good. For every 'Orca' there's 'Up From the Depths' and 'Claws'. For every 'Birds' there's 'Frogs' and 'Day of the Animal'. It's a viscous shit cycle, but man do I love me some shitty movies. If you're thinking that the movie 'Slugs' can't really be about giant killer slugs, well, you're right. These are just your ordinary garden slugs, but with one exception; they crave human flesh!

In a small town, like every other horror film, a couple goes out on a boat in the middle of a lake. Suddenly the boy gets pulled into the water by an unseen force. The girl laughs as she thinks it's a prank, but little does she know that her boyfriend is being devoured alive by toxic slugs! She screams as a blood pool floats to the surface.

Town Health Inspector Mike Brady is apparently also the town sheriff, as he goes out to every emergency situation in the entire town. People are dying left and right all in bizarre fashion, and there are always slimy slugs at the scene. Mike takes a live slug to his friend, who happens to be a chemist, or biologist type scientist. Apparently these slugs have been feeding off of toxic chemicals and now have developed an insatiable taste for warm flesh! I could go on, but I highly doubt a movie about killer, man-eating slugs needs much of a plot.

Like many other films on this website, this was a VHS cover I had seen in every video store in the early '90s. I mean shit, look at that cover. That guy has had the rest of him devoured by slugs, and he's still screaming as they devour the rest of his face. That has "Rent Me" plastered all over it. The first time I got around to seeing this film I was shocked to find out that it was a Spanish/American production, and with that, some hysterical dubbing. The acting in this film, regardless of the performer's nationality, is bottom of the barrel. Some real cringe inducing dialogue allows for some real unintentional hilarity.

If you've seen director Juan Piquer's 'Pieces', then you should know the gore factor is at 11. The situations where the characters die are fucking priceless. There's a couple having sex, and then the girl falls off the bed to be eaten alive by the titular slugs. Then the guy falls to his death. We also see a guy whose digested some slug to have a collection of blood worms spew from his eyes while his face melts off. It's one of those times you know if they remade this film that all these effects would be CGI, and that makes me a sad panda. The highlight of the film though is when Mike has to kill all of the slugs, and blows them up in the methane filled sewer beneath the city. Then the town proceeds to blow up killing dozens of unnamed citizens in the explosion.

'Slugs' is one of the pinnacles of bad movies. The dialogue, acting and premise are fucking awful. I mean seriously? Killer slugs? However, if you're like me you live for these ridiculous violent horror movies you'll probably find a lot to enjoy in 'Slugs'.

Amazon Page
Posted by Chris at 7:12 PM No comments: I've only been to New York City once in my life , but if movies have taught me anything it's that NYC is far and away the most dangerous city in the world. Monster and alien attacks, terrorists, serial killers. To quote The Ramones, "New York City really has it all."

If such hideous events unfold on the surface of the Big Apple, then what terrors lay beneath the asphalt? 'C.H.U.D.' is a film that gets better with each viewing. While it's not the most gorgeous looking film, or even the most well constructed it features a solid cast, and reaches into the fear of genetic mutation.

A woman walks her dog down a dark street at night. Right off the bat you know something is going to go wrong. While walking past a manhole she drops her purse, and BAM! A monster claw comes out of the sewer to drag her and the little dog to the hell below.

George Cooper (John Heard; aka the dad from 'Home Alone') is a former fashion photographer in New York who happens to also live with his beautiful model girlfriend, Lauren Daniels (Kim Greist). George has grown tired of the fashion world, and has started writing his own articles; one about a society of homeless living under the streets. The award goes onto heavy acclaim, and George gets constant pressure from his agent for new material. George tells him to fuck off.

Captain Bosch (Christopher Curry) leads a precinct in New York City where a large number of missing persons have been reported. One of these reports comes from A.J. "The Reverend" Shepherd (Daniel Stern; aka Marv from 'Home Alone'), who runs the local homeless shelter. Apparently a lot of the "under-grounders" have not been showing up as of late. Then A.J. drops the bomb.

A test done by the Nuclear Regulatory Commission has been going on down in the sewers; stirring up his customers. It normally runs 2 weeks, but A.J. says it's been going on for 4, and still going on. That's when A.J. shows Bosch some "lost" equipment from the tests; a work boot and a Geiger Counter. Bosch and A.J. travel down to the spot in the sewer where A.J. found the equipment. They happen to turn on the Geiger Counter, and that's when the thing goes off the charts. Then a monstrous roar is heard. It's the C.H.U.D.'s!

So, dedicated reader, I bet you're asking yourself "Hey, Chris? What in the world does C.H.U.D. stand for anyways?" Well, it just so happens that the acronym has two meanings! The first, which is what the movie means is 'Cannibalistic Humanoid Underground Dwellers.' However, turns out the government has been dumping chemicals under the city for years; 'Contamination Hazard Urban Disposal.'

Being a monster movie the costumes are pretty outlandish with glowing eyes, slimy razor claws and necks that get erections! Apparently this wasn't the original design, which was supposed to be much more zombie like. I enjoy the design as it sets the film apart from other movies of the time. With that, the film features some fantastic gore effects from the creature mayhem. Decapitations, disemboweling, limbs severed. Fun for the whole family!

The dialogue and acting are both fantastic. Actors Christopher Curry and Daniel Stern took a turn at re-writing the script and really fleshed out the story. This is a Monster/Sci-Fi movie after all, so obviously my using of the phrase "fantastic" is up to reader discretion. The supporting cast is full of actors you've seen in many other places, and with bigger roles. The best supporting role in the film is that of John Goodman playing a cop who gets slaughtered in a diner. Side note; all three leads have played roles in the 'Home Alone' franchise. John Heard and Daniel Stern in parts 1 and 2, and Christopher Curry in Part 3. 'C.H.U.D.' starts futures people.

'C.H.U.D', to me, is like a fine wine that you have a rather large bottle of. You enjoy it every now and then, appreciating how well aspects of it have aged. For the first time I watched the film with the commentary featuring Daniel Stern, John Heard, Christopher Curry, Director Douglas Cheek and Writer Shepard Abbott. Easily one of the best commentaries you'll find on a movie, it features a cast and crew who are also friends. It's insightful, but it's also fucking hysterical.

'C.H.U.D.' is a B-Movie masterpiece with an original story, a wonderful cast and brutal special effects. With actual locations, and detailed sets that allow the film to offer a real world feel. It is currently available on DVD from Anchor Bay.