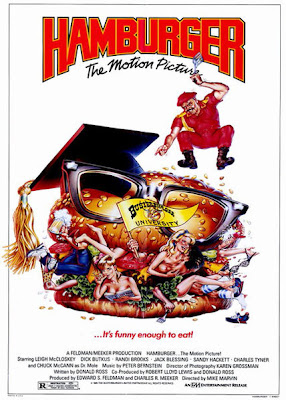 When 'Porky's' hit it big in the early '80s, a wave of sex comedies aimed at teens were excreted from every producer in and out of Hollywood. A low budget sex romp was almost guaranteed ROI for anyone wanting to make a name for themselves, so we were "given" films like 'Hot Resort' with Bronson Pinchot. That's not to say that there aren't some genuinely funny moments in these films, but it's like finding a stack of cash in a port-a-potty. You may have come up on top, but you still had to wade through a lot of shit.

The appropriately named 'Hamburger: The Motion Picture' was a cover that I had seen plastered in almost every mom 'n pop video store I had been in. What pre-teen wouldn't be excited over naked women busting out of a giant hamburger? Well, I guess kids nowadays wouldn't be interested, but that's for a different blog. Throughout the years, I had wondered if a DVD release of this film was to ever happen, let alone some type of streaming capability via Netflix. Low and behold, a VHS copy happened to be in a lot we had purchased.

'Hamburger: The Motion Picture' tells the story of Russell, a college man whose studies have gone astray due to the copious amount of intercourse he enjoys. The ladies just can't have enough Russell, and it's caused him to be expelled from four different universities. While getting reamed out by his parents at home, a commercial for Buster Burger University appears on TV. Russell enrolls at BBU, and finds himself at the mercy of Drootin, the drill sergeant of making hamburgers. Also, because this movie is full of cliches, Russell also finds himself falling for the Buster Burger heiress, who also happens to be engaged to Drootin. Will Russell overcome his slacker lifestyle? Will he defeat Drootin and get the girl? Find out in 'Hamburger: The Motion Picture"!

Before we continue, please try to enjoy the opening credits of this film:

The absurdity of this movie is summed in the opening credits. The song sounds like a mesh of Bon Jovi and  Bruce Springsteen, while featuring a montage of delicious hamburgers. What a shit show. It's horribly edited, and tells you that Americans are fucking fat and eat a ton of meat. So, here's a view into a satirical take on a franchise restaurant like McDonald's, add a mix of characters from better films and you have 'Hamburger: The Motion Picture'. It's not a bad film by any stretch of the imagination, but in no way is it any good either.

There are really only three standout performances in the entire film, and that is from the lead portrayed by Leigh McClosky, Charles Tyner who plays the founder of Buster Burger and Dick Butkus; just because it's the greatest name ever. In terms of comedy, the film only has a few standout moments, but that seems to be from a weak script. I don't see fault in the actors, but more so in the mediocre script by Donald Ross. Not familiar with the name? Well, unless you were watching a shit-load of 'Murder She Wrote' or 'Small Wonder' that doesn't surprise me. It seems like this was his first break in writing a film script, but he should have put this dud back on the grill.

At the end of the day, 'Hamburger: The Motion Picture' will fade into obscurity. There's nothing original in the film, and outside of a few physical gags and one-liners, there is not much to recommend. With a wide array of 80's sex comedies to choose from, you're better off going with a tried and true classic.