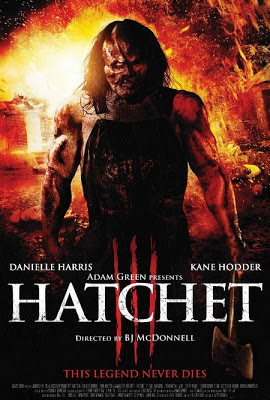 For those of us in Boston we are still coming to terms with the horrific tragedy that fell on Marathon Monday. Patriots Day is a tradition amongst us Bay-Staters where we go and cheer those who run the marathon, or perhaps go and catch the early Red Sox game at Fenway. Since those events there has been an outcry of support from allover the country with fundraisers and events.

At the end of May 2013, Adam Green will be hosting a series of events to raise money for the One Fund. It's great to see someone with strong roots here in Massachusetts bring their art to help those in need. Here's the press release:


ADAM GREEN RETURNS TO MASSACHUSETTS TO RAISE MONEY FOR THE ONE FUND BOSTON
Boston, Mass - May 8, 2013 - Celebrated horror genre filmmaker, television star, and Massachusetts native, Adam Green will return to the Boston-area, from May 28 - 30, 2013, to host a series of events and raise money to help those families most affected by the tragic events that unfolded during the 2013 Boston Marathon. The events include an advanced screening of the second season of the sitcom HOLLISTON, which premieres on FEARnet June 4, 2013, a celebrity benefit and silent auction at the Worcester Palladium, and the first-ever marathon screening of all three HATCHET films, including the first public screening of HATCHET III, opening in select U.S. theaters on June 14, 2013.
Born and raised in Holliston, MA, Adam got his start making local commercials for Time Warner Cable Advertising in 1997, where he borrowed company equipment to make his first feature film COFFEE & DONUTS. In 2000, he moved to Hollywood, CA and set out to turn the film into a television series. Over a decade later, it was re-developed and re-titled HOLLISTON, and premiered on FEARnet in 2012, where it was immediately embraced by critics and audiences. Adam also made his mark on the horror genre with the 2006 slasher comedy HATCHET, which went on to become a bonafide fan-favorite worldwide franchise introducing the now iconic genre villain “Victor Crowley” to genre fans around the globe. Through ArieScope Pictures, Adam’s independent film studio, he has written, directed, and/or produced the theatrical feature films: SPIRAL, FROZEN, GRACE, and CHILLERAMA.
“I live in Los Angeles these days, but Boston is still the place I consider home,” says Green. “I’ve never forgotten where I came from and always infuse my work with Massachusetts references, whether it be showcasing the Newbury Comics logo in the HATCHET series, naming the fictitious ski mountain in FROZEN ‘Mount Holliston’, or setting my sitcom HOLLISTON in Holliston, MA. While I am just one guy, thankfully I have a body of work and a loyal and extremely passionate fan base within the horror community that I can call upon to step up and help. I think a lot of people underestimate not only the sense of community that genre fans share, but the fact that we are some of the most kind hearted and generous people you’ll ever meet. I know that the Boston chapters of the Hatchet Army and Holliston Nation will join me for this, not to mention my fans around the world that will hopefully donate to the cause online. However, the real heroes behind this are my friends at Rock and Shock and Wicked Bird Media who have worked tirelessly to make all of the arrangements, not to mention all of the various sponsors that are rising to the occasion to support all of this. I’m merely the face of an enormous heart and collective of individuals who want to help.”

Details for the events include:

1. "HOLLISTON Comes Home to Holliston": Season Two advanced screening and Q&A with the cast Adam Green returns to his hometown of Holliston, MA to host an advanced screening of three episodes from HOLLISTON’s upcoming second season, followed by a live Q&A with members of the cast, including Joe Lynch and Laura Ortiz.

In advance of the event, fans can bid on an online auction to win a private dinner with Adam Green before the party starts. More information about the auction can be found here: http://bit.ly/11gFDml.
Date: Wednesday, May 29, 2013
Time: Doors open at 7 p.m.
Location: The Palladium, 261 Main St., Worcester, MA 01608
Admission: $5

3. HATCHET movie marathon: Featuring the first ever screening of the highly-anticipated HATCHET III. Join HATCHET franchise creator Adam Green for the first-ever HATCHET marathon, including a screening of a rare uncensored UK 35mm print of the original HATCHET, an uncensored 35mm print of HATCHET II, and the first ever screening of the highly anticipated, and also uncensored, HATCHET III.  Special guests from the films will be in attendance.
Date: Thursday, May 30, 2013
Time: 7 p.m. to 1 a.m.
Location: The Revere Hotel, Theater One, 200 Stuart St., Boston, MA 02116
Admission: $25

Tickets will also be available at the door the day of each event. For more information regarding ticket sales, please call The Palladium box office at 508-797-9696. All proceeds will go towards The One Fund Boston.

Events are hosted by Rock and Shock and Wicked Bird Media, and are sponsored by Green Van.
Posted by Chris at 5:15 PM No comments: