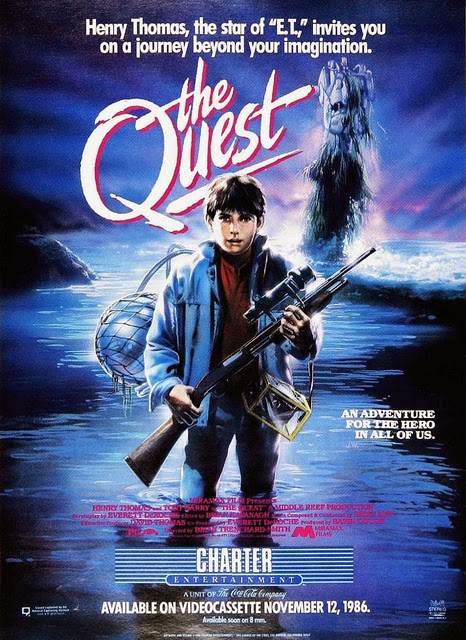 I'm a sucker for a good family friendly movie. Films like 'The Sandlot', 'The Goonies' and 'Ernest Scared Stupid' have all been watched by me at some point this year. I know I'm a pompous asshole (I have a blog), but I really do think family films have gone to hell. There was a time that films aimed towards families didn't have to rely on 3D, or computer generated effects to hold the audience's attention. I don't really blame that on anyone. That's just moving through the times. Your grandparents were right guys; everything really was better when you were kids.

Obviously, some films really stick with you when you're a kid. You watch them until the tape breaks (or for you youngings; the DVD was scratched), and unless you were able to record the film off of cable, you might not see that movie again for a long time. As was the case with Brian Trenchard-Smith's 'The Quest', or as it was known it Australia 'Frog Dreaming', or as it was known in the UK 'The Go-Kids'. I always find it funny that they have to name it something different depending on where the film was released. For instance 'Boogie Nights' roughly translates to 'His Great Device Makes Him Famous' in Chinese. Look it up.

A pond sits still at the bottom of a quarry as a man drifts lazily in a canoe. Suddenly the windmill starts spinning without the assistance of mother nature's farts. The blades spin faster and faster as violent bubbles emerge to the surface. The man violently paddles towards shore as the waves become intense from what stirs below the surface. As he climbs to land a creature breaks the surface causing the man the die in shock. The lake returns peaceful as the blades of the windmill slow to a halt.

Enter a kid named Cody ('E.T.'s Henry Thomas) who is working on a device that will connect his bike with the local railroad track, to break the record of train station to school in 3 minutes. Cody's parents died in America, so he is living with his uncle Gaza (Tony Barry) in Australia. While on his way to beat the record a local passenger car comes, and knocks him of the track.
Rushing to his side would seemingly be his girlfriend, although that was never really discussed. Apparently, Cody is a real rebel, but with that, quite smart for his age. Cody, his maybe-girlfriend and her sister go out for a picnic in Devil's Knob, a park with the mysterious quarry-monster that you read above. The three find the quarry, and find themselves experiencing the same phenomena as earlier. The three don't die, but instead find the body of the man who died before. What is the creature that lurks in the lake? Cody is determined to find out, and will go far into the realm of Aboriginal myth to understand what is simply known as "Donkegin".

What really brought me to the movie was the way that B.T.S. (Brian Trenchard-Smith) beautifully shot the location in Mount Eliza, Victoria. This was my first venture into the catalog of B.T.S., but it hasn't been the last. 'Leprechaun 3', 'Escape 2000', 'Night of the Demons 2', 'Dead End Drive-In'. His use of color is what really makes a lot of his films shine through, and is able to get humor in the madness that he unfolds. With him again is composer Brian May who has done a good chunk of B.T.S.'s films. The film is up to par with May's other work, and greatly uses a good array of instruments to heighten the tension at the quarry.

Henry Thomas seems more rigid here then he was 4 years prior in 'E.T.'. With the little emotion he shows his character seems focused on only one goal; discovery. Never really caring about anything else, so we never see him really enjoy his surroundings. Maybe he subconciously hates it. The kid's spirit though reminded me of Indiana Jones, Johnny Quest and Sherlock Holmes rolled into one completely awesome adventure burrito. This is one boy adventurer that would make Dr. Jonas Venture proud. The rest of the cast does their part well, but it's not really about the acting and about what lurks below the surface.

The biggest fault in 'The Quest' is the action, or lack there of. The cover promises (two of the three covers, anyway) that this kid is going to get in some serious shit. Doesn't happen, and instead we're given only 3 action sequences and the best is the reveal towards the end of the film. Don't get me wrong I enjoy 'The Quest' a lot, but it's that I find enjoyment in Cody's adventure to learn about the happenings at Donkegin Hole. That can't be all the film needs more than just this to really hit home with most viewers. I understand that it's a movie aimed towards kids, but you should add risks to the story by adding more action sequences. While Cody searches the outback we are never really worried about his safety. There is no threat, and with that, it is hard to buy that Cody is this fucking bad-ass adventurer when he has nothing playing against him.

This is a fun and basic family film. While the story might not be as action packed as the cover would suggest, it's still a decently acted, well directed and scored movie. At the end of the film you realize the world is a big place, and there are many things that we'll never be able to understand. 'The Quest' is not available on DVD. There were a few separate VHS releases in 1986 from Charter Entertainment, and 2000 from Anchor Bay Entertainment.