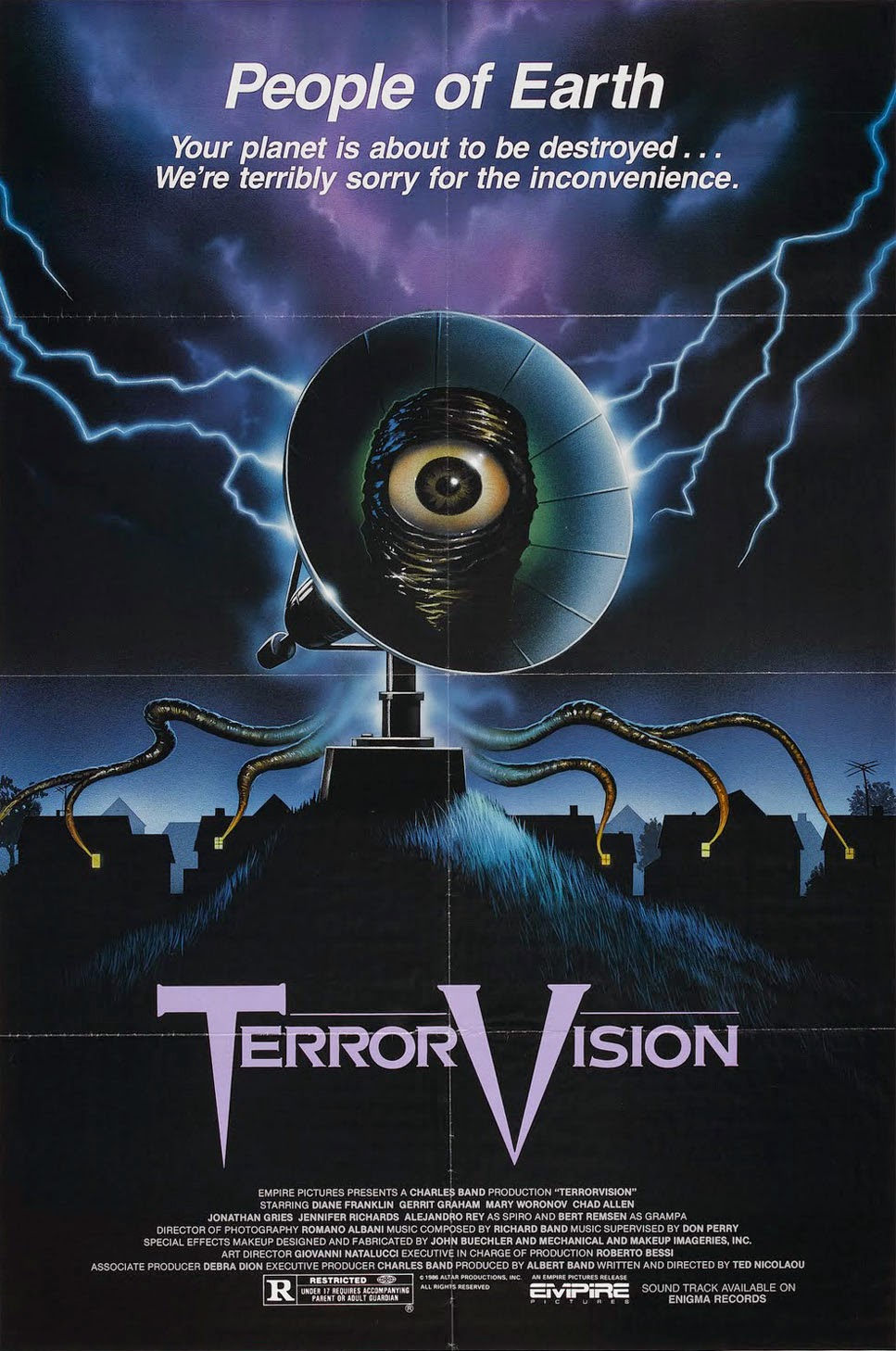 Remember when you actually went out to video stores? And I'm talking pre-DVD. Having enticing artwork was a way to get renters to choose unheard of movies. Some genres that capitalized more on this than any other were Science Fiction, Horror, and Action. Notoriously known for having less than stellar plots, acting and effects; these genres produced hundreds of titles a year. Though cheap Comedies, and innocent Family/Children movies were a dime a dozen, those markets are pretty easy to go after. Kids will fucking watch anything you throw at them. Cheap comedies? Teens that aren't "allowed" to go see R-rated films by themselves are a great market to go after with cheap knockoffs.

The real tricky thing is pulling off a successful cult movie. I mean, most people hope that their movie is a huge hit. Movie making is a business after all, but they can't all be hits. (I'm looking at you, Adventures of Pluto Nash!) Sometimes a film becomes a hit on video, primarily through word of mouth. 'TerrorVision' would be an example of that. Originally bombing at the box office 'TerrorVision' would later find life on VHS. I saw this cover for years in a local video store, and on a 2-for-1 Tuesday, I picked up this and 'Killer Klowns from Outer Space'.

Stanley Putterman (Gerrit Graham) has just got a new satellite TV for his whole family. All Raquel (Mary Woronov) wants to do is watch her jazzercise show, Suzy (Diane Franklin) wants to watch the new "It" band on MTV, Sherman (Chad Allen), their son, is playing soldier in the yard,and Gramps (Bert Remsen) hates everyone. While setting up the dish out back a lightning bolt comes and hits the satellite! Holy shit! What are the odds, out of the hundreds of locations, that it lands in this one family home? Familiarity, how I love thee. Suddenly, the reception is great and the Putterman family goes to see what channels they can get lost in. Monster movies, troop movements, Channel 69, and a weird creature that just stares at you. Doesn't really do much other than leer your down, and want to munch on your innards.

Suzy's boyfriend O.D. (Jon Gries) comes. He's into metal , so much that he asks Sherman to "Kiss the Boot". They ask mom if they can use the jacuzzi, and she says no because they'll be swinging this evening. That leaves gramps and Sherman to watch hours of monster movies, thanks to Medusa's (Jennifer Richards) late night horror show. Everything is all swell, that is, until the monster comes out of the TV and eats grandpa! Sherman is the only one who witnesses the horrific ordeal, and everyone else thinks it's one of his episodes. Sherman, with his soldier training (from his senile grandfather) plans to kill the monster, save the world, and turn off the TV once and for all!

There are many things, as a bad movie lover, that I loved about 'TerrorVision'. From the soundtrack, to the set design, to the over the top dialogue. The sub-plot of the swinging parents is fucking outrageous. First off they talk about it openly with their kids as if it's no big deal. Your 16 year old daughter might know what that is, but your 10 year old son sure won't. The couple they pick up to do the eight leg shuffle is great. Cherry (Randi Brooks) is the perfect airhead blonde. Never really fully aware of what's going on, but coherent enough to chime in idiotically about some acting audition. Her lover is Spiro (Alejandro Rey), a manly man. He means that in the gay way, or as he refers to it "I'm into Greek." The reaction from Gerrit Graham is awesome. He's really one of my favorite character actors, and it's always nice to see my favorite actress Mary Woronov.

Jennifer Richards is hysterical as Medusa, and Jon Gries (another favorite of mine) is very over-the-top as metal head 'O.D.'. O.D. becomes a father figure for the creature at a point as his spiked cuffs remind him of his master on his home world. I'm glad they give the creature a decent enough back story here. It's nice to know that this thing was someones pet. This thing: 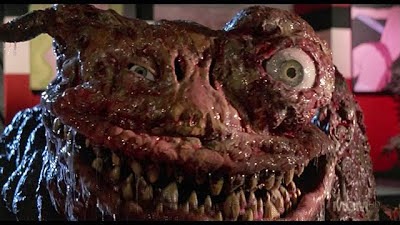 The highlight in the movie is the effects, and puppeteering of the monster. The effects of Mechanical and Makeup Imageries, Inc. is just phenomenal. The detail put into every inch of the face of the monster. It it's all pretty impressive for this low budget of a movie.

If I were to fault the movie in any areas it's that the whole riff on E.T. is a little forced. I mean sure, have the kids try and tame the monster but it goes on for too long. Kill off a character, and speed it along. At the 80 minutes that would bring it down pretty low. That's the other issue. The film moves too quick for its own good. The attraction is of course the creature, but you can take it in a few directions to lengthen to plot out another 10 minutes or so:

One: Hire more actors. Problem solved. You kill off the characters, and more screen time for the monster which means more people renting. The crowd who rents this wants to see the violence, and the absurd situations.

Two: Let the creature break out of the house, and they have to track it down through the neighborhood. Add some suspense, and potential gags to the ending which is where you want to audience to be riveted to know how it's all gonna end.

Overall the tone is in the right place as an ode to '50s science fiction, but with a tongue-in-bloody -cheek about it. While the pacing might be quick, it delivers with the monster goods. The availability of this is quite low. There is no DVD available, nor is there any on the horizon. Netflix has offered it streaming off and on since October of 2010, so that might be your best place to catch it. The studio who owned the film, MGM, had its back catalog purchased by Sony Pictures.


*UPDATE* - 'TerrorVision' has been recently released in Blu-Ray combo pack with 'The Video Dead' by Scream Factory.

Someone (or many people) need to make more movies in this vein these days. There's an audience for it, and I know I would love to see something like this. Also, whatever happened to all the hand drawn movie posters (and corresponding vhs covers)?

This was a pretty good film, but I didn't like the downbeat ending. I mean if you're film is a comedy and it makes you feel good, how are you going to ruin the whole thing by having a downbeat ending?