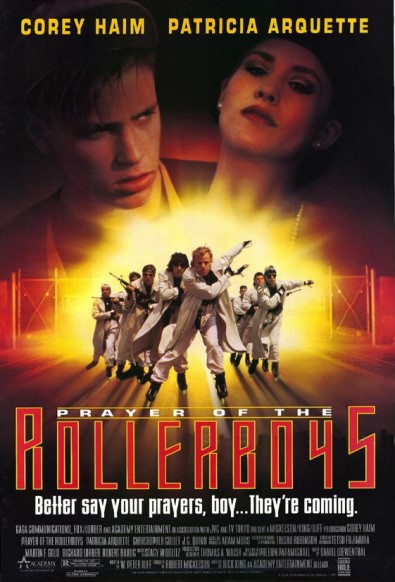 Post-apocalyptic movies offer the chance for a writer to really differentiate themselves from other films on the market. Your film can be immediately after shit hits the fan, or you can have it be a few years later when society has fallen into turmoil. My personal favorite film in this genre is John Carpenter's classic 'Escape from New York'. It's one of the director's best works, and solidified Kurt Russell as one bad ass action hero.

The star power that was Corey Haim was dropping faster than living Beatle members, but that didn't stop him from continuing to work. 'Prayer of the Rollerboys' was a film that I found in a local flea market for $2.00. I had never heard of the film before, but shit, look at that cover. A flying V of white trench coat wearing gang members, and starring Corey Haim? Sold.

In a not too distant future America is in debt to many foreign countries, and has been invaded and taken over. The poor and homeless are forced into camps, and the rest scrape by to live and eat. Griffin (Corey Haim) has moved from somewhere back to California with his little brother Miltie. Griffin makes his living by delivering pizzas, but one night destroys the delivery van while freeing a person locked inside a burning house. Turns out that the person was a member of the notorious Rollerboys, a racist gang who distributes the terrifying drug, Mist.

While rollerblading in a garage the Rollerboys come visit Griffin and Miltie. Turns out that the gang leader Gary Lee (Christopher Collet) used to be neighbors with Griffin until their parents were taken away, and put into camps. Now Gary runs the most violent gang on the west coast, and is looking to recruit Griffin up into his gang. The Rollerboys are planning something called "The Day of the Rope" and the cops want to figure out what is going on. Griffin gets roped (hah) into being an undercover agent to discover what is going on with "The Day of the Rope", and stop the Rollerboys once and for all.

I can't believe that I hadn't seen this movie when I was younger. This is the exact type of movie you would find on HBO, Cinemax or Showtime after midnight. Where to start with 'Prayer of the Rollerboys'? Well, the look of the film is halfway decent for a film of its type with desolate gray skies, and the city destroyed. While watching the film for a second time I noted how I felt like I had seen the plot in other movies. Griffin bargains the safety of his brother to become an undercover Rollerboy, and Patricia Arquette is there to be the other set of undercover eyes. Been there, done that. That's not to say I didn't enjoy it, but come on, give me something new.

The film isn't really anything special, but it does have some fun moments. Christopher Collet is a pretty good villain, but it's weird to see him as any other character than Paul in 'Sleepaway Camp'. The film looks more expensive than it probably should with impressive cast of extras, and good location shooting. The real downsides of the film are that of the supporting cast. There is only one member of the Rollerboys (besides Christopher Collet) that is a halfway decent actor, and that's Mark Pellegrino of 'Lost' and 'Supernatural'. Every other actor is there to pad or eat the scenery. Then there's the music, which is generic synth drums with distorted guitar chords over it. Think 'Lethal Weapon', but shittier and by Godsmack. So, just shittier I guess.

'Prayer of the Rollerboys' is not going to be remembered for showing Haim's remarkable acting ability, but it's an interesting take on the post-apocalyptic genre. It's interesting to see how the premise of this film relates to some similar trends in our times. The country being in debt, and subsequently being purchased by foreign countries is starting to sound more true. I really hope that this isn't what we're in for though because I sure as fuck can't rollerblade.

'Prayer of the Rollerboys' is available on DVD from United American Video, and VHS from Academy Pictures.

Hi there, great post! I just thought you might get a kick out of my recent profile of "Rollerboys" director Rick King (with many hilarious behind the scenes stories about Corey Haim!) You can read it here: http://hidden-films.com/2013/05/28/without-him-thered-be-no-point-break-the-diverse-work-of-filmmaker-rick-king/

hope you enjoy and i will certainly link to your blog, it's awesome! thanks,
Sam