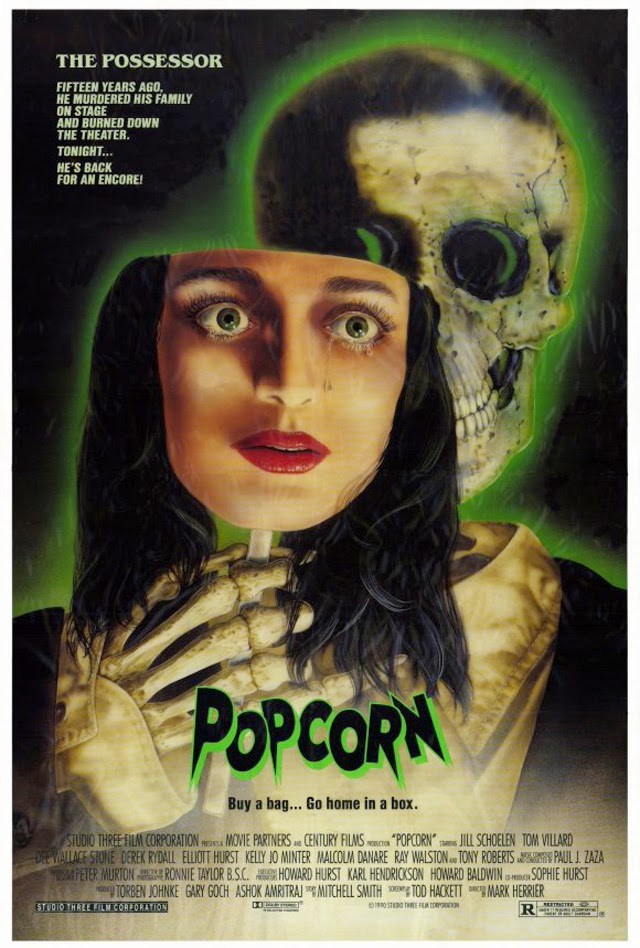 Long gone are the days of the gimmick film where seats buzzed, and when ghosts and monsters roamed the aisles. The amazing William Castle, who entertained audiences with such greats as House on Haunted Hill and 13 Ghosts, believed he could provide thrills outside of the silver screen. Rigging the theater with all sorts of proprietary gags made Castle a name to be recognized. With almost every other week a 3D film being released into theaters nowadays it's a little hard to think that a film in 3D was a rare treat.

Perhaps it was the changing tastes of the movie-going public that brought the end to theater gimmicks, but there are two great examples of tribute to the lost art form. The first being Joe Dante's overlooked period piece Matinee, with an outstanding performance by John Goodman in tribute to the late Castle. The other film that tips its hat to Mr. Castle is the offbeat slasher film, Popcorn.

Popcorn revolves around Maggie, an aspiring screenwriter attending UC Berkley, who keeps having vivid nightmares which she fuels to write her script. While attending class, Maggie's film teacher Mr. Davis tells them they need to get some funds for their department, or risk being shut down. So Mr. Davis enlists the help Dr. Mnesyne, who is a film historian, to re-create the lost art of the gimmick with such thrills as 3D, Shock-O-Scope and Odorama. The goal is to have an all-night horrorthon to raise money for their program.  As the event starts, Maggie starts to learn that her nightmares are repressed memories from her childhood, and it appears that her past has a deadly way of catching up with her.

As a fan of both 80's slashers and 50's Science Fiction, Popcorn is, well... a real treat as a genre fan. It's hard to look at the film as one cohesive story as there are two films going on here, both of which highly entertaining. The kills are all different and rather inventive, and while some of the actors may not be what you'd consider "A-List" (with the exception of the ever lovely Dee Wallace) they suite the film just fine. My favorite moments are the films within the film, serving as the go-between to the slasher stuff. This is just personal preference as the slasher story is handled really well for a film of this type.

Popcorn is out of print on DVD, but available from Elite Entertainment. Synapse is supposed to release a special edition Blu-Ray this October, but I haven't heard any updates as of yet.