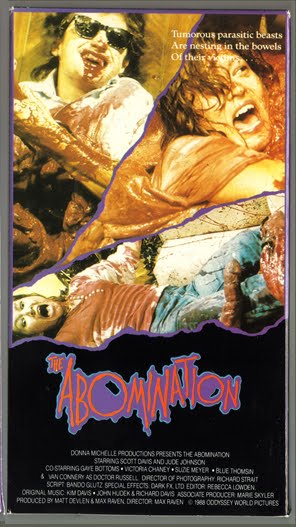 One of the best/worst things to come out of the VHS boom of the 1980's was the advent of movies Shot on Video (SOV). Independent filmmakers with access to a camcorder would churn out all sorts of genre fare that studios wouldn't produce. It's pretty shitty when you think about it, but you have to go out on your own if you want to make your film. The sad universal truth is that most studios wouldn't touch these movies "with a ten meter cattle prod", to quote Ray Stantz.

SOV Horror movies might be god awful, but that's not to say there isn't a charm to them. While the script and direction are often deplorable, the cinema style of Ed Wood comes to mind. Believing in your story, regardless of what little talent you have. Such is the case with the film 'The Abomination'. I had been exposed to SOV movies for some time now as I had viewed 'Redneck Zombies' and 'Dead Next Door' many times in my youth, but this was a title that hadn't come across my radar. Then I saw copies of the VHS selling on eBay for around or over $100, and wanted to know why the hell this movie was so sought after? Was it some sort of lost gem of the SOV horror genre? Then I got a DVD-r at a Horror convention. Then I found out why they named it.

The film starts out showing all the violent moments that you're going to witness during the opening credits. I guess this was so that we wouldn't have to sit through this awful film. After about 4 minutes of repeated scenes we are thrown into the world of Cody Lee, who is having a lot of problems with his mother. Apparently the doctors say she has a tumor in her lung, and it is inoperable, but she hasn't given up hope. She turns to Brother Frogg, a televangelist who promises to heal those who send in their social security checks. After she places her hand on the TV set during a prayer, she violently coughs up a bloody chunk the size of a biscuit. Saying hallelujah she throws the disgusting heap in the trash, but only to have it grow in size.

Cody comes home after driving around with his friends, for what appears to be 5 hours and goes to bed. The tumor then springs to life, and climbs its way into Cody's sleeping mouth. Cody then starts feeling strange, and discovers that the tumor is some type of monster who devours humans whole. As the tumor starts to multiply Cody must feed the beasts, and let the abomination take over the world!

The one thing that you have to really admire about these independent productions is that they have original stories. That tends to be the only thing to really admire as the acting, direction, script and almost everything else is offensive. It sounds like that they couldn't record any audio while they were filming, so they decided to record the audio in someone's shower. It's louder than a Manowar concert, and the mix is just terrible. It's this that really makes the dialogue hysterical. No actor, a term I use loosely, could act their way out of a paper bag, let alone carry a film. Then, there is the notion that Cody is talking to a psychiatrist at some point during the film, but then it's never revealed who he's talking to, if anyone. Then there is a 4-minute run time of a biblical quote about the abomination. It starts to really cause a migraine after the first minute.

For those of us who just want to see the gore in the movie, well, I'd honestly say find a way to watch the film for that alone. The effects are memorable in their creativity, but overall the film is a fucking shit show. Running all over the place in terms of pacing, acting and direction. The editing choices are mind boggling, but if you're in the mood for one awful fucking movie, then seek out 'The Abomination'.

'The Abomination' is available on VHS from Donna Michelle Productions, but good fucking luck trying to find it. eBay is the best option, but, like I said you're going to have to pay for it. It's best to find a site that distributes DVD-r versions of OOP movies, and shell out $10 instead of $100. Even then, it's probably not worth it unless you're dying to see it.

This actually was shot on Super 8 not Video.