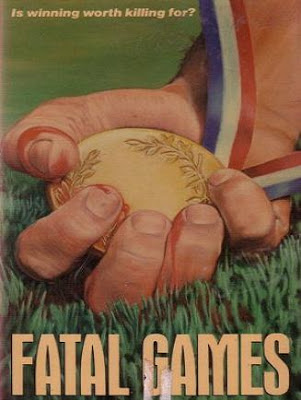 When looking back through the history of film there was no time for Horror like that of the 1980's. With the video boom in full swing producers were able to turn out cheap imitations of more popular titles. When 'Friday the 13th' hit in 1980 the era of the Slasher was paved, and the home video market never was the same. At around the time that the novelty was wearing thin (the first time) there were more Slashers in your rental store than in your local theater. The market was over-saturated, and the ROI for these films became less and less.

This is where a film like 'Fatal Games' comes in; riding the Slasher coattails. Released by Media films in 1984 it's a film that many nowadays won't know, but to those who saw the wonderfully drawn cover in a video store may have been duped into renting.

'Fatal Games' starts off with a montage of hopeful Olympians training in their respective sports. It's topped off by the wonderfully cheesy song which states "winning isn't everything; it's the only thing". What struck me as odd with 'Fatal Games' is that there isn't an opening murder to give you the tone of the film, and instead it feels like you're watching some after school special. We're then thrust into the world of seven athletes who are competing in the national...something or other. As these seven Olympic hopefuls train to better themselves for the big game there is an unseen force, yielding a javelin, taking the youths out one by one.


Honestly, the above plot summary might seem a little light on description, but believe me that this was one forgettable Slasher. What films like 'Silent Night, Deadly Night', 'Friday the 13th', and 'My Bloody Valentine' have in common are elaborate death sequences that keep you watching. 'Fatal Games' on the other hand has none of that. Some Slasher films use their shortcomings by upping the gore quotient, but again 'Fatal Games' fails to deliver. Every victim, with the exception of the killer, die by the aforementioned javelin. The first kill was a laugh out loud moment as I just didn't see it coming. I mean seriously? A javelin? It's too absurd to be scary, and it just becomes comical. After the fourth kill it started to get a little excruciating, and then we're just stuck with this image for 84 minutes of overacting. 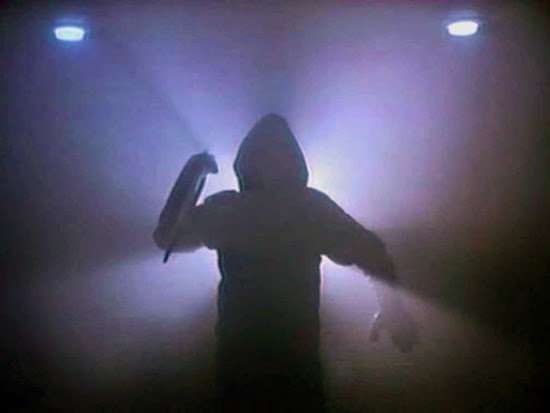 There is only one actor (a term I use loosely) that uses any range in their deliveries, and that is Sally Kirkland, who was nominated for an Oscar in 1988 for 'Anna'. I really didn't find her to be "Oscar Caliber" in 'Fatal Games', but then again, there is nothing award worthy here. The characters are all flat, and their deaths just don't mean anything when you don't give a shit about them. Each actor seems to come from an authentic sports background, so I guess that adds some legitimacy? Maybe not, but other than the actual school location there aren't really too many positives about 'Fatal Games'.

Probably often rented in the mid to late '80s, but has been forever out-of-print since the early '90s. 'Fatal Games' can be found in parts on YouTube, and I've included the first part down below. This is a film for those Slasher enthusiasts who need to see every film. There are only so many times you can see the same kill over and over again. Unoriginal kills lead way to paying attention to the actions of the characters, and that just makes 'Fatal Games' another painful excuse in home video treachery.


Enjoy the full movie! If you can stomach it.