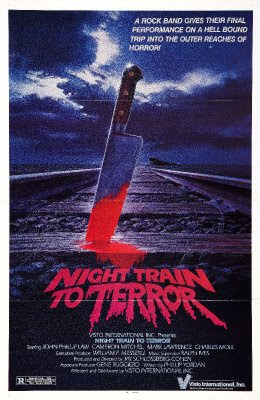 More often than not, smaller film projects do not finish production. It happens to some Hollywood films as well, but independent producers have so much more on the line. Budgets can run dry, mechanical issues, technical ineptitude; all valid reasons why a film can fail. One then has to wonder what happens to the remnants of film, the shot footage of what would have been.

Which brings us to 'Night Train to Terror', a little anthology movie from 1985 comprised of three edited films. In my travels amongst the collectors circuit, I had seen the Prism clamshell VHS every now and then, but had never found a copy myself. Actually, I owned the theatrical one-sheet before I even saw the film. Upon viewing this poster for the first time I knew I had to see this movie.

Apparently this band is playing aboard some train because their ride has broken down. While practicing this completely asinine song over and over again, Satan (Lu Sifer) and God (Himself) are mulling over the fates of not only the band members, but outside individuals as well. Let me pause to state that, yes, the Devil is played by Lu Sifer and God does indeed grace us with his wonderfully hammy performance. From here we are given our three stories. 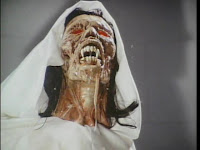 Instead of breaking down each segment, which I hate doing, I'm going to discuss 'Night Train to Terror' as a whole, because at the end of the day I didn't watch individual segments. Anthologies, as much as I love them, can be a mixed bag. Some stories are better than others, and it kinda sours the whole experience. Like biting into an apple and finding a worm at the core. "The Case of Harry Billings", "The Case of Gretta Connors" and "The Case of Claire Hansen" were all taken from full-length films and trimmed to show what, I'm assuming, are the best bits from each movie. We get electrocutions, body harvesting, killer bugs, demons; all parts for a gloriously terrible movie. 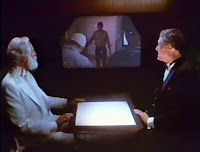 However, since these are truncated versions of full stories we're left scratching our heads bloody and raw over continuity errors, pacing, and general "what the fuck did I just watch?" moments. It's these factors that make watching a film like 'Night Train to Terror' so special, so similar to Ed Wood's 'Plan 9 from Outer Space' or, to a much lesser extent, 'The Abomination'. These are films that are so bad in every sense of the word that no one outside of Arkham Asylum should enjoy them, but due to how inept they're crafted, an audience warms to the terribleness. There's no justifying it's a bad movie, but at the end of the day it's this:  how much fun can we have with it? It's subjective, but I found 'Night Train to Terror' a hoot.

Ever since seeing George Romero's 'Creepshow' when I was a kid, I've always had a soft spot for anthologies, no matter how terrible. Like Dr. Ellie Sattler digging through triceratops shit, we're trying to find prime examples that keep us coming back for more. 'Night Train to Terror' is by no means a good film, but with horrible continuity, terrible effects and one of the most absurd wraparound stories ever, it's a fun way to hang out with some friends and laugh.

Wikipedia
Posted by Chris at 5:02 PM