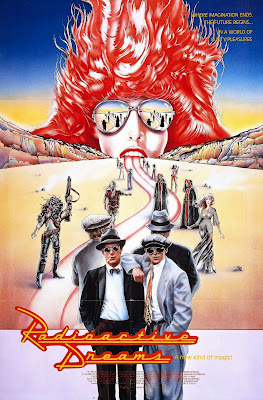 I've always had a fondness for a good post-apocalyptic movie. The different views on what happens after the civilized world fades into distant memory are often as ridiculous as they are fantastical. Most of my favorite ones are where the the premise tends to be towards the former. I like a post-nuke world where it's as absurd as it can get. I guess that's why I prefer 'The Road Warrior' to 'Mad Max'.

Combining different genres can sometimes be both a blessing or a curse depending on how the movie is made. One or two genres isn't hard in the case of horror comedies like 'Shaun of the Dead' or 'Slither', but when you're combining multiple genres it gets hairy. The example would be a film like 'Radioactive Dreams'; a comedy, action, science fiction musical. That description will either have you running to see such a hodgepodge, or ignoring it like a cold sore.

'Radioactive Dreams' tells the tale of Phillip (John Stockwell) and Marlowe (Michael Dudikoff). Two teens that have been in a bomb shelter since there was a nuclear war in 1995. The only education the two have received are from private investigation books, and articles from the 1940's. So, when they exit their shelter 16 some odd years later, they're thrown into the 1980's version of the future. Which means mutants, punks, cannibals, giant rats and a bad-ass New Wave soundtrack. When Phillip and Marlow accidentally wind up with a pair of keys to launch the last two nuclear bombs in the world, every gang is out to get these two dicks.

Now when I said earlier that 'Radioactive Dreams' was a hodgepodge of genres I'm not kidding. It's framed like a film noir, but the absurdity of 1940's detectives on the backdrop of a post-apocalyptic world is too comical. Both main characters Phillip and Marlow play it completely straight, and it's their interactions that provide the humor. Then we have the aspect of the film also being a musical, which to me is what makes the film so unique. With songs by Sue Sadd we're given a soundtrack that both elevates the ridiculousness of the plot, but also sets the film firmly in the 1980's. I am sucker for New Wave and 80's music, but that can limit the audience and may make the film feel a little dated.

'Radioactive Dreams' is a fun time capsule of 1980's cheese. While the overall mishmash of plot points may be a little much too digest at first, with each watch there is more and more to notice. From the fantastic soundtrack, to the ridiculous costume and set design, 'Radioactive Dreams' is a real blast for fans of 1980's cinema. Currently the film is only available on the Vestron VHS in the USA, but there is a rip on YouTube which I've included below. Enjoy and share your thoughts below!


*Update 3/31/16* - After 3 years and multiple watches, I've determined that Radioactive Dreams is my favorite movie of all time. Also, if you can find the Region 2 German DVD by JAM I highly suggest it.