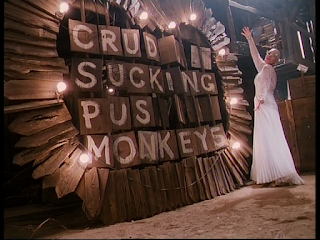 Do you remember watching a movie like Billy Madison on TV, and all of the sudden there's a scene of the staff playing kickball you hadn't noticed when watching on video? Or maybe you've heard that a movie like Johnny Mnemonic had an extra 14-minutes in the Japanese cut? One of the more trying points of being a movie fan is keeping track of all edits/alternate scenes to your favorite films. The world of alternate versions is pretty vast, so I'll select a few recent films I've viewed.

Over the past few years I've come across edits of some of my favorite movies that were released strictly for foreign markets. We, as the consumers of these films, have little to no insight as to why a distributor may feel that one scene may work for their European market, but when the film is released here in the United States the edit could be different. Let's take for instance Alex Winter's Freaked. Upon my first viewing of Freaked on HBO in the early 90's I was hooked. I loved the ridiculous characters, dialog and the plot. The film was perfect for my pre teen humor, and as I grew older I found new jokes that went WAY over my head years earlier.

This year I found the German DVD release of Freaked that contained two scenes which were not in the American edit. Sure, these were more than likely included in the deleted scenes portion of the supplemental features on the Anchor Bay disc, but to see the new flow felt a little better to be honest. The inclusion of a scene in which the Freaks play Wheel of Fortune continued the riff on Hollywood Squares to show how the mutated residents of Freek Land spend their time. Later in the film, once Ricky Coogan (Alex Winter) finds out about his horrid fate to be turned into a super-freak and destroy the others, he says fond farewells to each of the freaks. While not adding more than a few minutes to the American run time, these scenes were a welcome addition and felt like they should have been included originally.

Then there's edits of movies for television. While not every movie is edited for television, most are. In can be for a multitude of reasons (as stated prior to any airing), but more often than not these movies are relatively the same version you'd see in theaters or on video/disc/interwebs. Sometimes these result in hilarious dialog censorship (see: Casino) or glaring omissions of violence (see: Casino). Then there are films where questionable material is edited out, and new footage inserted to make up the running time. When the Disney Channel used to be a premium station, and they had the "free preview weekend", they would air a version of The Goonies which included the octopus scene, which I have recorded and is my preferred edit of the movie. There's also the discussion Jason and I
had on the podcast last year in which we detail the differences between the theatrical and television edits of Alligator. 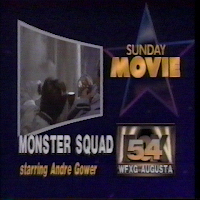 One recent example of a TV edit that stands out was a recording I received of Fred Dekker's The Monster Squad, which was recorded off of a Fox affiliate out of Augusta, GA in 1995. Monster Squad for me as a kid was the best movie in the world. Sure, I was also a big Ghostbusters fan, but the combination of all the classic monsters was a joy to see as a 5-year old who was just discovering horror. Flash forward 26 years, and now I see a version of this beloved film with a few scenes extended, and a random flashback sequence added later on. While not adding anything major to what was already a perfect movie, this was a real interesting watch. There's something fun about watching a movie with a fresh set of eyes, looking for any of those slight changes to alter your experience.

Then there's the much maligned discussion of the "Director's Cut" and "Unrated" editions of films that have come out in the past few years. Granted, there are instances where a film deserves to have the director release their version of the film (see: Superman II), but how many fucking times do we need Blade Runner released? Anyways, this particular conversation has been done to death, so in lieu of that, why don't we leave the forum open to you. What are some of your favorite edits to a movie that may not be the most commonly seen?
Posted by Chris at 12:00 PM