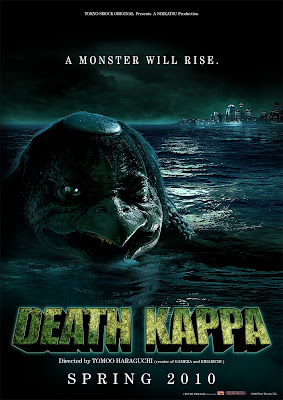 The execution of a proper parody is a difficult thing to accomplish. You have to be able to break the fourth wall with your knowledge of the genre shortcomings, while continuing to push the original story ahead. Too many times, we are bombarded with nonsensical pop-culture references that are supposed to represent plot and character development. That's why well loved spoof movies are few and far between.

Kaiju films have been lampooned forever, and, as described above, few are any good. The interesting thing about 'Death Kappa' is that while it was made in Japan, it has all the features of an American edit of a classic Kaiju film. Bad dubbing, special effects and incoherent plot points are only some of the aspects of 'Death Kappa' that are hamming it up.

In Japanese folklore, a Kappa is a mischievous goblin creature who happens to eat cucumbers (hence, Kappa Roll), and loves Sumo wrestling. This is all described in the beginning of the film by an American man with a Japanese name and accent. It sets the comedic tone for the film right off the bat.

'Death Kappa' tells the story of a Japanese pop-star who just couldn't hack it in the busy world of Tokyo, and moves back to the country to be with her one remaining family member, her grandmother. While taking the train back to her home town, the film is interjected with shots of  her grandmother walking with a basket of cucumbers and a group of rambunctious teenagers drinking and driving. Suddenly, out of a cliche, the grandmother is hit by the group of teenagers who speed off, and knock the remains of a petrified Kappa into the ocean (note: the "ocean" was represented by a fish tank).

The Kappa springs to life and dances around with the pop-star and her friends. All the while, a menacing creature is lurking on the beaches killing all in its wake. As the Kappa becomes friendly and dances to the star's music, a menacing figure is lurking around the corner. Are these two connected? What will happen to the Kappa and his friends? Where are the giant monster fights?!

Out of the last two questions presented only one matters:  giant monster fights. The film took the route of parodying two styles of Kaiju films: the family friendly and the classic monster vs monster. What I find to be the issue with 'Death Kappa' is that we are essentially given two separate movies that have to be judged as one. 'Death Kappa' is broken down into three parts: Family Film, Mad Scientist Film and Giant Monster Film. Each one handled differently in terms of what material is being poked fun at, but the jokes are just too forced and stale. From poorly written dialogue to cheesy computer effects, we're trying so hard to follow the story that the jokes are just pelted at us like a monkey throwing its shit.

It feels like the filmmakers really did have an appreciation for the giant monster movies of yesteryear, but with the face paced editing, it made the film feel too modern. The dubbing was atrocious, and it felt too much like the wooden acting was intentional. Sometimes it works, but mostly when the films weren't trying to be funny. The plus sides of 'Death Kappa' though are the costume and set design, which felt very much like a Kaiju film. Solid sculpting works on the monster bodysuits was a fine piece of eye candy, while your brain suffered through the plot.

At the end of the day though 'Death Kappa' is going to be a love it or hate it type of experience. There are a few laughs here or there, but I honestly felt like I was suffering through a lot of it. By the time the monster actually did make an appearance I had already checked out. It's not going to be remembered for anything other than a throwaway parody.

'Death Kappa' is available on Blu-Ray and DVD from Tokyo Shock.