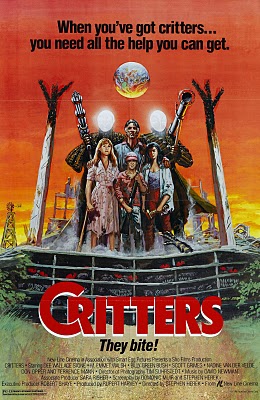 Some say that imitation is the best form of flattery; others call it plagiarism. Either way, imitation has led to some horrendous rip-offs and inspired variations. For every 'Friday the 13th' there's 'House of Death'. 'Godzilla' and 'Gorgo'. George Romero's 'Dawn of the Dead' is responsible for almost 80% of zombie films from 1978 to 1983.

Then there are the films that claim they were written prior to those films. The film 'Critters' is one of them. I mean sure, you can try to cover your ass but I mean come on. If Steven Spielberg and Joe Dante's 'Gremlins' wasn't a hit at the box office I'm pretty sure New Line wouldn't have financed the film. That's the Hollywood machine sadly. What film is your film like, and how much money did that film make? With 'Gremlins' doing $148 million, that is more than enough convincing for studios to finance cheap films about dangerous little creatures. 'Hobgoblins' , 'Troll', and 'Munchies' are just some of the bastardized offspring of 'Gremlins'. 'Critters' on the other hand, was a well done variation.

An asteroid flies aimlessly through space, but this is no ordinary asteroid. It is a prison designed to hold the most vicious aliens in the solar system. Apparently the most notorious, the Crites, have been captured. Of course, as this is mere minutes into the movie the Crites break loose and escape the prison with a stolen space ship. This floating mass (similar to Mojo from the X-Men comics) hires two faceless bounty hunters, whose assignment is to track down the Crites at all cost.

Meanwhile, in a rural Kansas town on Earth, a family by the name of Brown works on their farm to make a living. Daughter April (Nadine Van der Velde) is trying to get in the bathroom before school, but her brother Brad (Scott 'Grimey' Grimes) is taking his time. The typical family bickering continues until a phone call for April comes in, and it's Steve from school. Jay (Billy Green Bush), the patriarch of the family, is concerned that his daughter might not be aware of how everything, you know, works down there. His wife Helen (Dee Wallace Stone) informs him that she's known for years.

Farm handyman Charlie (Don Keith Opper) is the town drunk. It's so bad that he's even got a room setup in one of the jail cells. Harv (M. Emmet Walsh) the town sheriff tells Charlie he better get his ass in motion if he wants to keep his job. Charlie keeps on his story about how he can hear alien transmissions through is teeth, and that it ruined his chances at the pros. Charlie shows up for work, but is distracted by Brad and his homemade fireworks. When Brad's slingshot breaks and Charlie attempts to fix it. April comes home in Steve's (Billy Zane) car, and Jay tries his best to introduce himself. In testing the slingshot, Charlie misses a tin can and hits April in the ass. Brad takes the fall for Charlie, and is sent to his room without dinner. He learned his lesson; never take the blame for a drunk.

Meanwhile, in space, the bounty hunters have traced the Crites to Earth and begin finding a way to transform their play-doh faces into human bodies. The first, by the name of Ugg (Terrence Mann) searches through history for a body to duplicate, and comes across '80s rocker Johnny Steele (also played by Mann). Taking the look of a flammable rock god, in spandex, Ugg waits for his partner to transform. He's being picky, and can't find any one person over a thousand years to look like.

Night falls on the Brown farm as the family, subtract Brad/add Steve, gather for dinner. April is obviously hot to trot as she's all up on Steve's crotch under the table. She grabs Steve to go for a "drive", which is code to go fuck in the barn. Jay brings his punished son some food, and confiscates Brad's slingshot. All of the sudden the Crites ship lands on their yard, and start on the prowl for food. After devouring a cow the Crites aim towards the town, and the Brown family home. Will the bounty hunters be able to save the family in time, or will they have to defend the planet themselves?

For this viewing of 'Critters' I was able to view one of the few remaining 35mm prints at The Coolidge Corner Theater. This film was another staple for many young horror viewers as it was PG-13, and could be seen by a studio's biggest demographic; teens. Then with that, video rental and cable brought the film to a whole new generation. One of my favorite things about 'Critters' is how the film finds great moments to add humor into the script. Whether it be from the Crites themselves, or from the town folks there are many moments to lighten to mood.

The main attraction in films like 'Critters' and 'Gremlins' are the special effects. How the creatures interact with the human players is clutch. If the movements are too jerky the effect looses credibility with the audience. The effects in 'Critters' are pretty fun, but not really packing the WOW factor you had from the effects of 'Gremlins'. The Crites are about ankle high, but are like piranha on crack. A pack of four can devour a cow in under ten minutes, and strip a human clean in under five. I enjoy the effects of the Chiodo Brothers (they also directed, and did the effects for 'Killer Klowns from Outer Space'), but I'm not really scared of the Crites. I feel like I can kick them pretty easily, or at the very least burn them with a cigarette and hairspray.

The script contains the typical family pitfalls. Brother and sister rivalry. The father trying to accept his son. The mother trying to hold on to everything. It's all pretty run of the mill, and the acting does help with the cliches. Dee Wallace Stone is in my opinion just as likable here as she was in 'E.T.', and I'm always a fan of M. Emmet Walsh. Billy Zane in one of his first rolls is just there to be Critter bait, and his death is only slightly memorable for some chomped fingers and munched guts.

'Critters' may be a product of the '80s, but there are elements that hold up well for today. It's campy, and fun. A time capsule into when special effects involved material and hand, not a computer. I do recommend 'Critters', but it's more of a last on the list type of movie. While entertaining, the film doesn't really pack too big of a punch action wise. There are a few parts where the threat of eight Crites isn't as menacing as it should have been. 'Critters' spawned a slew of sequels. The second film, 'The Main Course', is my favorite of the series. The body count is higher, and more time to showcase the Crites in action. The third features Leonardo DiCaprio, and it's pretty shitty. However, it's not as shitty as 'Critters 4'. The Crites attacking a spaceship, and there is a marine with a huge drug problem trying to fight them. It's pretty bad.

'Critters' is available on DVD from New Line Cinema, and is also available in a box set with all four films.