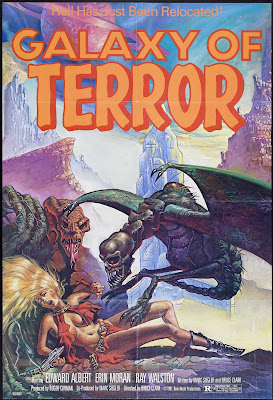 The blending of Science-Fiction and Horror is one of my favorite genres in film. Often times the results are horrendous, but the films have a charm about them. The way the cast interacts with the special effects, the way the director uses his crew to get the most atmosphere out of a shot. There are times when the films work fantastically; 'The Thing' (1982), 'Event Horizon'(1997), 'The Blob' (1988), and of course 'Alien' (1979) have proven to be very well executed genre films.

The movies mentioned above though have a thread in common; budgets. They can pull off fantastic effects which will dazzle the audience. Low budget features, like those from Roger Corman, try a little bit harder to get your video dollars. 'Galaxy of Terror' was a film I've only heard bits and pieces of over the years. I knew it had a decent cast, and the infamous worm scene was well discussed, but other than that the film was foreign to me.

The film opens with on a blue planet, with blue lettering for the credits. You can't read who's in it without glasses, so you know that it's not the most important. Some random person is killed by an unseen force aboard what is apparently a spaceship. It all happens so randomly and quickly it's hard to gauge what's going on. We're then thrust into what is apparently a Galactic conference of some sort with a witch, and some guy whose head looks like a lava lamp. Lava Lamp Head is apparently known as the Planet Master and rules over the fates of those in the Galaxy. Apparently he requests a team sent to the blue planet, Morganthus.

A team including Freddy Krueger (Robert Englund), Mr. Hand (Ray Walston), Captain Spalding (Sid Haig), and other body-bags enter the spaceship blasting off to the planet Morganthus. Their mission is the look for any survivors of a previous excursion, but there seems to be some devious characters aboard the vessel. The Commander is a little old for a field mission, and there's a cook. Apparently, machines normally make the food on spaceships, so a human doing it is tipping some of the crew towards interference from a government figure.

The crew is pulled down to the planet by an unknown force. Once the team lands a party is sent out to look for the missing crew members. On the crashed ship the crew finds that the missing parties are horribly butchered. Apparently when bodies of dead people are found in this future they're destroyed with a blaster because every body except one explodes when shot. A crew member lags behind after samples are collected, and soon has his head ripped back by some sort of cricket looking thing. From here the crew investigates the barren planet, but it appears that Morganthus is hiding more below it's surface.

The basic premise of 'Galaxy of Terror' is that your fears become real, and can kill you. Apparently the planet is some sort of testing ground for a new Planet Master. I really doubt I spoiled this film for you with that, but I felt that you should know exactly what's going on because even at the end of the film it's still kind of unclear. The film was beyond entertaining, and was filled with memorable moments. There's a scene where a man's severed arm throws a blade to kill him; a scene where a mammoth worm rapes and kills a woman, and not one but TWO Robert Englunds for your dollar.

The acting is what you tend to get from a late '70s, early '80s Roger Corman fare. It's cheesy, but there are actors who really like their material. Sid Haig ('House of 1,000 Corpses') asked to have almost all of his lines removed, and played the role mute except for one line. Robert Englund is just as awesome as ever, but his character's fate is never resolved; he just sort of stops being discussed about 15-minutes from the end. Then there is the always fantastic Ray Walston who most will recognize as the strict Mr. Hand from 'Fast Times at Ridgemont High'.

The look of the film is like most 'Alien' clones, but to be honest that works for me. It's all about how you film the corridor scenes to build the atmosphere. You need to feel trapped along with the characters to really showcase the fear, and thankfully the scenes here are filled with dread. Then there is the fact that a young James Cameron worked on 'Galaxy of Terror' as Production Designer and Second Unit Director. It seems that the suits were so impressed with his knack for low-cost solutions that it helped his career to what we know today.

The negative aspects of 'Galaxy of Terror' involve the fact that you're never really sure what the fuck is going on, and then the ending just sort of happens. It really takes the awesome down a huge amount as you're left scratching your head bloody and raw. There are a lot of 'Alien' clones on the market, but I found 'Galaxy of Terror' to be pretty well executed for a low-budget feature. The actors seem to enjoy their roles, and the set design and effects bring the film above your typical cheap cult films.

'Galaxy of Terror' is currently available on DVD and Blu-Ray from the Shout! Factory.