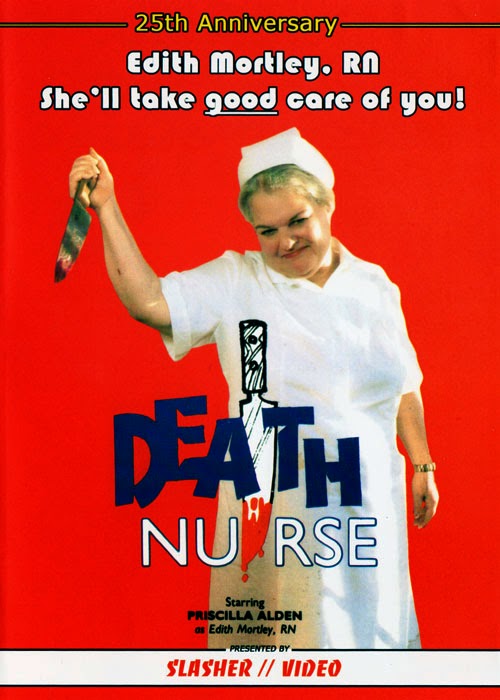 I've seen and reviewed my share of ridiculous films throughout my time on this earth, but I find that when watching a film shot-on-video (SOV) I tend to be more relaxed with my feelings. While I will always say The Abomination is a wretched film, there is a lot of entertainment to be had with the right inebriation. There's a certain chunk of salt one has to swallow to enjoy these films, and more often than not they're poorly made and convoluted.

At the Shady Palms nursing home, Nurse Edith and her brother Doctor Gordon take care of their patients. They give them beds, offer food, and unnecessary surgery and murder. While more patients are brought in for their "exquisite" care, Edith and Gordon take turns either performing surgery or suffocating, stabbing. Soon though they find themselves with more corpses than they can handle. What are a murderous brother and sister to do?

Death Nurse is a pretty baffling movie. At the staggering 57 minute run time you are thrown into one of the most weirdly edited, shot and acted films ever. Again, that's not saying it's bad, but, well... It's bad. In an enjoyable way, but you're scratching your head as to why most of these decisions were made. Long shots of actors doing nothing. Dream sequences that are never explained, also these sequences were taken from the film Criminally Insane, so they obviously needed the padding.

The acting from Priscilla Alden is spot-on with its awfulness. It's wooden and no awards will be given for her performance, but it's endearing. The "production value" of the film was that of probably one weekend, the director's family/friends, 5 VHS tapes, a Panasonic camcorder and two VCRs for editing. It's cheap and it shows, but it's never serious and allows for organic laughs with the dark humor while everything else in the movie provides the unintentional chuckles.

Death Nurse isn't going to win any awards, but it's a movie to throw on with a group of friends. It's under an hour of your life, and most of us paid to sit through Avatar. That shit was like 3 hours. You could watch Death Nurse, Death Nurse 2 and two episodes of the Simpsons in that time frame and be more entertained that tree sex bullshit.

Death Nurse is available from Slasher // Video, but it is limited to 1,000 units.