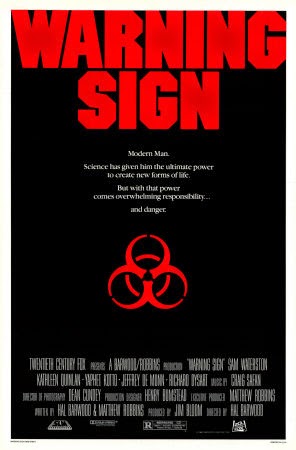 There is a respectful fear that comes with the thought of the end of the world. Although you know it's the last days of your life you will still freak the fuck out. Filmmakers like Roland Emmerich and Michael Bay have destroyed civilization so many times it's hard to believe that apocalyptic films are still a draw at the box office (Emmerich's '2012' made over $700 million world wide. Then there is the $2.1 billion dollar cash cow that is the 'Transformers' series.) For every disaster, or apocalyptic movie that hits there are countless more that fail.

Not every downfall of mankind is brought by natural disasters or shape shifting robots. Although both aforementioned directors would love you to keep buying tickets to think so. Often we're our own demise as is the case with the 1985 film 'Warning Sign'.

The film takes place within the confines of the pesticide manufacturer BioTek. A crew working diligently in the P4 lab are fitted with the highest tech (by '85 standards) safety gear. A crew member knocks over a vile (obviously sinister as this is five minutes into the movie), and it falls to the ground.

Celebrating the company's new chemical the crew gather to take a group photo, aimlessly kicking the vile around on the floor. How has no one seen this brightly colored plastic container? Doctor Tom Schmidt (G.W. Bailey) says he can't see their faces, and asks them to unzip their suits. In doing so he accidentally steps on the vile, and unknowingly infects the room. Dr. Bailey leaves to leave for the day, but in doing so takes off his infected contact lenses and stores them for his post shower duties. Simple folks. The message here is get LASIK, or you'll get some terrifying disease.

Security guard Joanie Morse (Kathleen Quinlan) is in her office checking the labs while people prepare to leave for the three day weekend. While talking on the phone to her husband, sheriff Cal Morse (Sam Waterston) a bio-hazard alert (or, 'Warning Sign'. Eh? Eh???) goes off. Every level of the compound is being sealed off to prevent further contamination, and the staff is terrified. Joanie tells Cal that there was a scientist who left the company a few months ago by the name of Dr. Dan Fairchild (Jeffrey DeMunn). Cal says he's a drunk who just can't be trusted.

Meanwhile a crowd forms outside BioTek, and Cal thins the heard by using some muscles. By this time a helicopter arrives with Major Connolly (Yaphet Koto) who is determined to keep this under control. It turns out that BioTek is really a front for the Department of Defense who are beefing up their germ warfare division. Meanwhile, the crew that stayed behind in P4 are found to be unconscious, or dead. The fear spreads throughout the compound as the virus starts to spread. The virus is designed to kill the victim, re-animate them and cause their most viscous violent actions come forth. As more staff are infected the race is on to find a cure, and stop the disease from reaching the outside.

'Warning Sign' wasn't a big hit upon it's release in the late summer of '85, and I'm actually a bit surprised by it. The cast is rounded out by a few familiar names like Sam Waterston ('Law & Order', for the better part of a quarter of a century) and Kathleen Quinlan ('Event Horizon'). Yaphet Koto (Alien) is as always awesome although his role isn't as awesome as 'The Running Man', but that has the Schwarzenegger factor going for it. You also may recognize a solid performance out of Jeffery DeMunn, who is currently playing Dale on AMC's 'The Walking Dead'.

The first time I watched this movie a few months back I was amazed to find the plot similarities in so many movies, and comics. The phenomenal Garth Ennis series, 'Crossed', finds use of a virus that causes those who are infected to fulfill their most sinister and depraved desires. Although far more graphic that what's contained in 'Warning Sign', the similar concept was something I noted. '28 Days Later' is another example of similar elements, but then again that movie was influenced by many sources.

The plot itself is basic. The government runs the show behind the scenes while the sheriff tries to rescue his wife from the inside; all the while keeping the alcoholic doctor around. The acting is what elevates the movie, and even the bit players are very well cast. What really surprised me about this movie was that the characters were all very well defined through the ordeal, which itself was pretty awesome. The soundtrack by Craig Safan was when he was doing a lot of synth work, and it really fits the atmosphere of the film well.

What would normally be a generic end of the world story is elevating by a compelling score, very competent acting, and a setting that oozes atmosphere. 'Warning Sign' is out on DVD from Anchor Bay Entertainment, but is currently out of print. 20th Century Fox Home Entertainment currently holds the distribution rights.