When my I was a kid my dad would tell me stories about this film, 'Two Thousand Maniacs!', in which real cadavers were used for the special effects. That claim was incredibly false (thanks pops), but the film was splattered with gore unlike anything I had seen. By today's standards the violence is pretty hokey with animal parts used for innards, and red paint for blood. However, for 1964 they were pretty fucking outrageous.

H.G. Lewis (Herschell Gordon) began making pictures with skin films in the late '50s and early '60s. Titles such as 'Nature's Playmate', 'Living Venus' and 'The Adventures of Lucky Pierre' were his earliest "claim" to fame, but it wasn't until 1963 that something new would be tested. The market for skin flicks was waining, and looking for ways to get money in an untested market Lewis and producer David F. Friedman unleashed 'Blood Feast' on the movie public.

"We didn’t think it would have the profound effect it had. With Blood Feast, David Friedman and I set out to make a movie that the major companies either could not make or would not make." -H.G. Lewis in an interview with Louder Than War 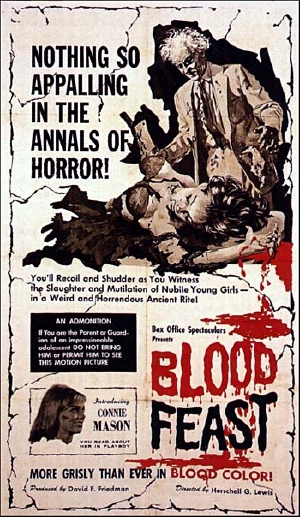 And with that spark of creative genius the world of horror would never be the same. A few other films had on screen violence, but it wasn't until 'Blood Feast' that it was so viscous. Armed with a budget of $25,000, and a 15-page script Friedman and Lewis brought gore to the world. 'Blood Feast' tells the tale of an Egyptian caterer by the name of Fuad Ramses who slaughters women to create the Titular Feast. The Feast is designed to bring about the second coming of the Goddess Ishtar. The film packs a punch with severed limbs, cut out tongues, and brains removed. All in glorious blood-red color.

The film, technically speaking, is pretty shitty. The acting is abysmal, the score is hysterical and inappropriately placed, but as H.G. Lewis said:

"I've often compared 'Blood Feast' to a Walt Whitman poem -- it's no good but it's the first." 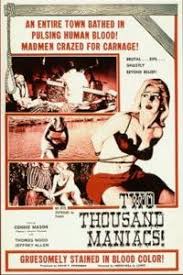 ccess of 'Blood Feast' at Drive-In's across the country, the team of Lewis and Friedman set on a new film titled 'Two Thousand Maniacs!'. 'Maniacs' told the story of a group of travelers who set foot in the town of Pleasant Valley. The town is celebrating their centennial, and it turns out these lost travelers are the guests of honor. Unfortunately for them, "guests of honor" means to be murdered by ravenous, cannibalistic Southerners!

'Maniacs' is my personal favorite of Lewis's Blood Trilogy. The acting is even more over the top than 'Blood Feast', and the death scenes more elaborate. Since 'Feast' made a killing (hah) at the Drive-In the budget for 'Maniacs' nearly tripled, and with that a much beefier script (70-pages). The cast seems to be having a blast making 'Maniacs', and with an entire town full of psychopaths it's great to see who might just be the next to kill. 'Manics' was remade in 2005 as '2001 Maniacs' with the always great Robert Englund ('A Nightmare on Elm St.' The good one) playing the town's mayor. The film is outrageous and super offensive. If you're a fan of the original I suggest checking out the remake, but I hear the sequel '2001 Maniacs: Field of Screams' is pretty fucking shitty.

Lewis's trilogy would complete with 'Color Me Blood Red' in 1965. The story tackles that of a struggling artist, who with the help of murder, achieves his finest work with the blood of his victims. The acting improves in this installment, but I don't find the film as fun as the previous two entries in the series.
After this last installment, Friedman left to produce in Hollywood leaving Lewis to handle the rest on his own. Friedman felt that the market was to be overrun by imitators, and wanted to try something new again. This left Lewis to try a few more films before retiring for a few decades. 'The Gruesome Twosome' tells the tale of a mother and son combo that murder women to make their famous wigs. Equally absurd, and entertaining. 'The Wizard of Gore' revolves around the magic show of Montag, and the investigation of those patrons who die after being included in a stage show. 'The Gore Gore Girls' features a serial killer attacking strippers, and the best scene involves the nipples being severed off a woman. The left containing whole milk, and the right dispenses chocolate. It's great to have options.

Lewis has since returned to directing in 2002 with the sequel/remake (think 'Evil Dead 2') 'Blood Feast 2: All U Can Eat', and his new film, 'The Uh-oh Show!' is currently awaiting release. This actually sounds like the most promising feature yet from Lewis, but does remind me of 'Deathrow Gameshow' in which contestants compete for fabulous prizes, but wrong answers will get your limbs dismembered! Sounds like a blast, and I anxiously await the arrival of the film in theaters some point in the future.

Herschell Gordon Lewis obviously has a lot of fun when he's behind a camera, and it makes more some really awesomely awful entertainment. The Blood Trilogy is available on DVD from Something Weird, and will be released on Blu-Ray this fall. Check out Something Weird's site for awesome examples of classic schlock cinema.

Something Weird
Posted by Chris at 5:10 PM