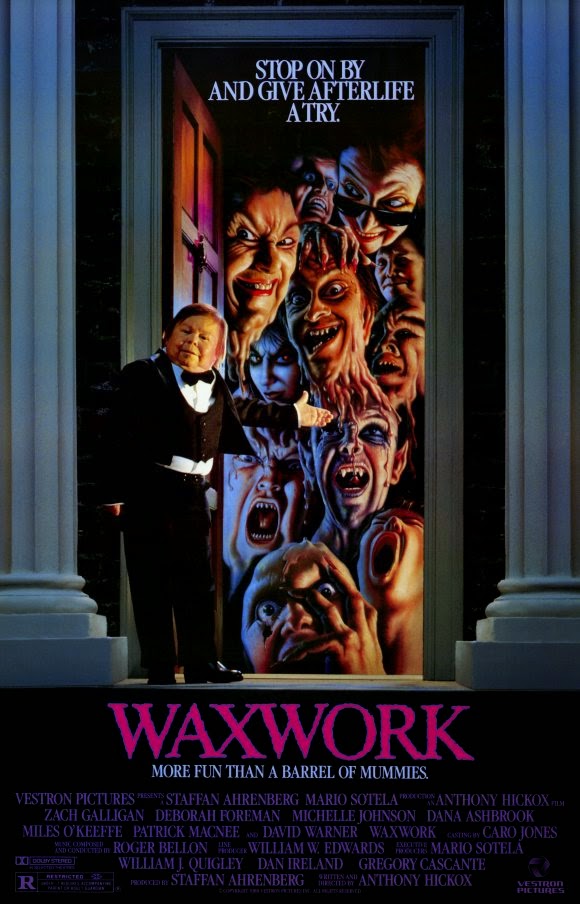 Sometimes I wonder how many people get as weirded out by wax museums as I do. I'm a little hard pressed to see why anyone would want to see wax replicants of celebrities and notable historians. It's just all too creepy for me. All those eyes following you. Fucking terrifying, but I guess that's why it's a great location for a horror film. The best example is obviously the Vincent Price classic 'House of Wax', and deservedly so. Price's chilling portrayal of villain Henry Jarrodd is one of my favorites in history. To be frank, I found the 2005 version (yeah, the Paris Hilton one) to be pretty fun. It was stupid, but knew what it was and executed it well.

Most wax museum themed films tend to riff off the vibe of someone either turning their victims into wax creations, or a murderer stalking nubile teens amongst the scenery. In 1988 director Anthony Hickox shat all over that formula by offering this; what if the display was a portal to the world depicted?

A violent struggle between two men breaks out in the study of a castle. Yes, a castle. A man's head is thrust into the fire, and simply dies. The assailant then smashes open a glass case, stealing the objects that lay inside. Pretty fucking intense way to open a movie, but the mood is lightened by a upbeat jazz number.

We flash forward an unknown number of years to see two young girls. Both China (Michelle Johnson) and Sarah (Deborah Foreman) are on there way to school, but are stopped by an interesting new building in the neighborhood. The Waxwork is operated by David Lincoln (David Warner) who invites the girls, along with up to 4 others, to get a sneak-peek at the new museum. It's always at midnight, and it's always the man with the sleek blazer and charming accent.

Mark (Zach Galligan) is in a fight with his W.A.S.P. of a mother who is denying her son some coffee; she really doesn't want him to grow up. Storming off to class his butler hands him his caffeine (coffee), and his nicotine (smokes). How do we to relate to these characters? If I had a butler handing me coffee and cigarettes I sure as shit wouldn't be working a full time job, that's for sure. Mark meets up with the rest of the gang in history class, lectured by an obvious Nazi sympathizer. Apparently, China and Mark have broken up, and she's opening the hanger, so to speak.

China and Sarah tell the gang (Tony, James, Gemma and Mark) about the viewing at the Waxwork while hanging out after school. A few find the option amusing while others would rather sit at home, and watch monster movies. They decide to venture over at midnight, but James and Gemma bail. This leaves China, Sarah, Mark, and Tony to venture into the museum. The door opens, and NO ONE IS THERE! Oh, wait. There is the guy who played Alf. That was actually the actor in Alf's costume. He's three feet tall.

Then they go into the display room, and it is beyond anything they've seen, but when Tony drops his zippo in the Werewolf display, he is transported to the world depicted. Where a pissed off Gimli (John Rhys-Davies) is transforming into a woflman, and Tony gets got. The camera pans away from the display to show the body of this asshole slumped against the back wall. China on the other hand just waltzed into the Count Dracula display where she's to be the bride of the Count. She too, gets got and is added to the display. Sarah and Mark must now find out what happened to their friends, but who knows what awaits them in the 'Waxwork'. Mu-ha-ha-ha.

The concept of the display is the ghost, and those who enter are transported to that time is pretty spiffy. I'm sure there was a big debate as to what monsters and villains to use for the museum, but I feel they got some good ones in there. You see 'Invasion of the Body Snatchers', 'The Invisible Man', 'The Wolfman', 'The Phantom of the Opera', 'Dracula', 'Frankenstein', 'Night of the Living Dead', and many more. The references to other films was the perfect way to add humor into the script. You can be self-aware, but still give some atmosphere/tension to the scenes.

One thing this movie does in spades is the gore. We see people split in half, heads ripped off, flesh skewered, and bones crushed. There were two versions of the film, but if you're able to get your hands on the DVD (comes with part 2) then you'll get the gorier, "uncensored" version. As violent as the film is it off balances with great visual gags, one-liners, and good acting. Zach Galligan is as fun here as he was in 'Gremlins', and has even more fun with the role as he can swear all he wants. Cock. Balls.

Anthony Hickox does a great job with the visuals in the film, almost replicating the look of the films the displays are based on, but with his own eye. He also has a great detail for minor characters as some of the people in the ghost displays steal their respective scenes. I must admit, seeing John-Rhys Davies in a period werewolf story seems pretty fucking awesome. Hollywood, get on that.

'Waxwork' is an absolute blast from start to finish. Never too serious, but always on the offensive it shows it's affection for horror cinema of yore on its sleeve. With great directing, special effects, and acting it's a real treat for those looking for something a little self-referential. Take that, 'Scream'. 'Waxwork' is available on DVD from Lionsgate Entertainment, and also streams on Netflix a few times a year.