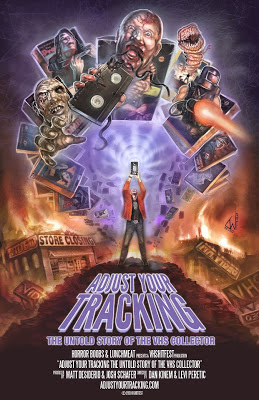 As huge supporters of independent artists we here at The Trash Pile hope to provide new films for our readers. We're thankful today to bring you an interview with the co-director of 'Adjust Your Tracking: The Untold Story of the VHS Collector'. ' Adjust Your Tracking' is a documentary that looks into the lives of fans that collect home video.


Trash Pile: As a lifelong collector of VHS it’s great to see a documentary covering our fan base. What was your decision to do a documentary as opposed to, let’s say, a narrative feature?
Dan: Well, through collecting I was meeting and talking to so many interesting characters that a documentary just seemed like a logical step. I knew the fans of VHS could hold a feature-length film and be interesting enough, funny enough, and compelling enough without having to turn them into actual characters for a narrative feature. Though I do have many ideas for horror films and comedies involving VHS collectors that I think would be priceless...


Do you remember what your first VHS was?
I know what my first VHS was when I realized I was actually collecting. It was Birds II: Land's End, the made-for-TV sequel to Hitchcock's masterpiece. It was one of the worst movies ever but also a movie I realized was unlikely to ever be released on DVD and an interesting part of film history. Then I just started buying up everything I could that never was released and it moved from there. As far as movies I remember watching on VHS religiously as a kid that would have to be Tremors, Puppet Master, Home Alone, Fiddler on the Roof, Alive, and Star Wars.

Why do you think the format has lived on for so long after its death?
Well, despite not having a commercial release in a pretty long time I feel like it never truly died. As long as there are great or interesting works of art that can only be viewed on VHS it will never be dead. I still have teachers at school show videos on VHS, I still screen movies for friends and family on VHS (either because that's the only way to get it or because that's the way it was intended to be seen, like in the case of a direct-to-video or SOV film), and I still buy VHS. I don't think it will ever actually die.

Where did you travel in making ‘Adjust Your Tracking’?
Man, where didn't we travel? That was the most insane and fun trip I've ever been on. We literally went in a giant circle around the whole country collecting interviews with VHS collectors and hunting for VHS. It was the most physically demanding trip but definitely the most rewarding. We went through Ohio, to Chicago, to MN, all the way across the top of the country through Montana to Seattle, down the west coast, then swooped around to Texas, then all through the south, and rounded it all the way back up to NYC. We collected over 100 interviews and thousands of hours worth of footage. And that was just one of the trips we made while filming!

As a VHS fanatic I’ve traveled to flea markets, thrift stores, etc. What were some of the crazy adventures you heard from some collectors.
Well, without spoiling any of the stories found in the film, as crazy as it may sound, we heard multiple near-death experiences involving hunting for tapes. We heard stories that will get everybody's blood pumping and heart racing, whether they are VHS collectors or not.

In a lot of ways VHS collecting has become very similar to collecting vinyl records. Do you think the collecting market will continue to grow as it has?
Yes, I do. I see it every single day. There are new people who decide to start collecting VHS daily and I hope this documentary will push that number up even more. The goal of the film is to give a glimpse into the world of the people who still cherish what many still call a dead format, but it also works as a little nudge to people who might not look at VHS when they are shopping at a thrift store or a yard sale and says, "Stop and look at those tapes, you never know what amazing shit you might find!" 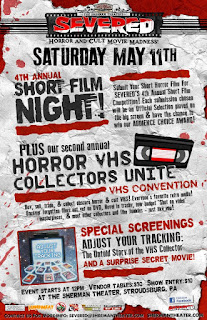 How long did the project take from fruition to completion?
Well, as of doing this interview it has actually been two full years to the month. Our first interviews were shot April of 2011 and the early beginnings of doing the documentary were in March 2011.

What are your plans for release? Will you be doing the festival circuit?
We hope to tour the film around the country and play it all over the place. We have a couple screenings set up so far which can be seen on our Facebook page (link below). We are also going to be submitting it to some festivals and attempting to set up some foreign screenings as well. As far as the release goes, possibly an early 2014 release on VHS and DVD is a goal.

In the day and age of HD and digital media it’s hard for most people to understand why people still collect formats like VHS and vinyl. How would you explain to a non-collector why they should watch your film?
To a non-collector I'd tell them they should watch Adjust Your Tracking because you need to see the highly enthusiastic, sometimes insane, subculture of VHS collectors. There's nothing like them anywhere else and if anything, this will appeal to non-collectors even more because it will give them an inside look into a crazy world they know nothing about. Beyond that, however, no matter your age your first memories of watching movies are on VHS and that should never be forgotten. Those are some of the most fun memories that people have about film and watching Adjust Your Tracking will take you back to that.

Lastly I just want to say thank you for bringing light to our crazy little world of collecting. Any last comments you’d like to share?
Well, I want everyone to go "like" the Facebook page (http://facebook.com/adjustyourtracking) and for everyone to tell your friends. Post about the film on your blogs, websites, etc. Do you have a magazine or write for one? Hit me up for an interview. My goal as of right now is to get as many people as humanly possible to know the name Adjust Your Tracking and to get excited to see it. What I put everything I have into is finally finished and I couldn't be more excited for people to finally be able to see it.