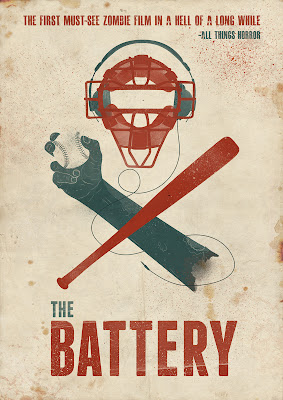 /ˈbatərē/ : A container consisting of one or more cells carrying an electric charge and used as a source of power.

Independent horror fare is a dime a gross. More often than not someone (like yours truly) thinks that they can grab a camera, and make the next 'Night of the Living Dead' or 'Blair Witch Project'. The sad truth is that most of these productions lack competency, but they still find their audience. Those examples stated above are the obscurity. The odd balls. Thankfully, I've never (successfully) attempted to make a film.

'The Battery' is a project where determination and passion outweighs any financial hurdles most films run into. The production was made for $6,000 and was shot in a staggering 15 days. Those figures alone should make any Hollywood production flip their respective shits. Through friends, co-workers and family the film was financed, filmed and edited.

'The Battery' is the story of two baseball players, Ben (Jeremy Gardner) and Mickey (Adam Cronheim) who are traveling across New England aimlessly. The only problem is that there are zombies at every turn, so the two men decide to venture in the woods for fear of overrun cities. In their journey through a deserted neighborhood, the two men come upon a pair of two-way radios, and find a conversation amongst two survivors: Annie and Frank. The two are discussing items for Annie's "shopping list" which happens to include a copy of the movie 'Tremors' for a child's birthday at The Orchard. Mickey attempts to communicate, but is told by Frank to never use this channel again.

Ben and Mickey begin to travel further into the wilderness, but tempers between the two rise. Ben, the realist of the two, pushes Mickey to accept the reality that the vision of things going back to normal won't happen. Mickey represents the romantic of the group. Hiding away in his headphones, he refuses to acknowledge the hand that has been dealt, and hopes and dreams for the world as he knew it to return. Ben and Mickey are the two ends of a battery, a term used to describe their relation as pitcher and catcher, but also their positions in life.

Jeremy Gardner's 'The Battery' is a crowning achievement in simplicity.  Keeping the cast and locations limited allows for the dialogue between the two protagonists to shine. The conversations between Ben and Mickey flow with ease between the two leads, and it feels like both Gardner and Cronheim have been acting for years. The supporting cast, while limited to only a handful, is present in the screenplay to serve as plot devices to further our look into the relationship between Ben and Mickey. With outstanding acting, the film moves at a rather excellent clip.

The cinematography is another highlight of 'The Battery' as the vivid New England landscape is captured in its rawest form by Christian Stella. The beauty of nature plays just as important of a character as Ben and Mickey by being the one constant in the world of the walking dead. Finally, the soundtrack is one of the best you'll hear in years with artists like Wise Blood and Rock Plaza Central are used to heighten the emotional journey between Ben and Mickey.

'The Battery' is a film that is simply a must-see. Whether you're a horror fan or just a fan of movies in general there is a lot of positives find in 'The Battery'. From an emotional character arc for each of the protagonists to gorgeous cinematography plus a fantastic soundtrack, Jeremy Gardner is a name to watch for in the upcoming years. It all starts here.

'The Battery' will be hitting VOD this June with a physical release later in the year.