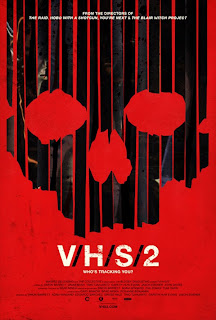 Since 'The Blair Witch Project' broke box office records back in 1999 it seems like everyone under the sun has tried to put their own spin on the found footage sub-genre. From zombies and ghosts to Sasquatch and Nessie; pretty much every producer could put in a little financial backing and receive a pretty solid ROI.  The truth is that most of these films were shoddily put together with little foundation of creating an entertaining film.

Last year, horror website Bloody Disgusting ventured into the original film department with their horror anthology release, 'V/H/S'. The film fared rather well in terms of audiences and critics, so inevitably a sequel would manifest itself in no time. I enjoy the first film immensely as it was a fresh take on the tired found footage formula, but I did have my issues with the film. The wraparound story of the group of men trying to search for a wanted tape was the first films biggest downfall, as the acting and characters weren't anything to envelop the stories in-between. The other issue, as with any anthology movie, is that you're going to be left with films you really like, maybe some you're impartial to, and others that you just didn't care for at all. A lot of people didn't seem to enjoy the Ti West offering in the last installment, but I enjoy a slow burn. 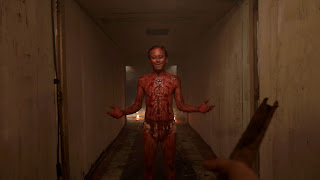 As with the previous 'VHS' film, the sequel starts off with a wraparound story to envelop the found footage horrors. This time round we follow a group of private investigators who are sent to find a woman's missing son. As they enter the apartment, they find TV sets stacked in a wall with dozens of VCRs and tapes haphazardly strewn about the room. As one investigator goes searching through the house, the other starts looking through the man's tape collection.

Now here is where I should provide details of all the tapes that are viewed, but that would take away from the fun of the film. Each of the four stories are so different, but compliment each other rather smoothly. The basic premise for the films are: Ghosts ('Clinical Trials'), Zombies ('A Ride in the Park'), a cult ('Safe Haven') and an alien abduction ('Slumber Party Alien Abduction'). Whereas the first film had a few mediocre segments this sequel finds all the right beats from the first one, and amplifies them to the umptenth degree. Laughs, gore and atmosphere are all present in each segment, and the crowd I saw it with was laughing and screaming the entire time. 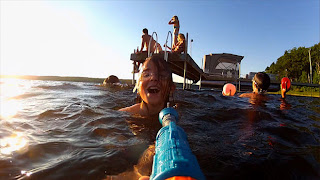 Honestly, I'm pretty hard pressed to find any issues with 'VHS 2'. It was exactly what I wanted from a sequel, and had a great sense of fun with each offering. The directors involved all did a wonderful job of staying within the horror genre, but allowing for comedic elements to ring throughout to offset the violence and scares. I don't even have a favorite segment, but if there was one that the audience seemed to respond to the most it was Gareth Evans 'Safe Haven'. This is the gentlemen who directed last years fantastic 'The Raid'.

While found footage may not have been reinvented with 'VHS 2', it certainly was well crafted in how to entertain an audience. For whatever faults there may have been in the previous installment, all have been eradicated with this new outing. The best thing about a budding franchise like 'VHS' is that it's a venue for up and coming directors to showcase their talents in a condensed form. They can churn out one a year like any other horror franchise, but the difference here is that we'll never see the same movie twice.

'VHS 2' will be released by Magnet Releasing on VOD July 6th with a limited theatrical run July 12th.