Slashing the Options: The Future of 'Friday the 13th' 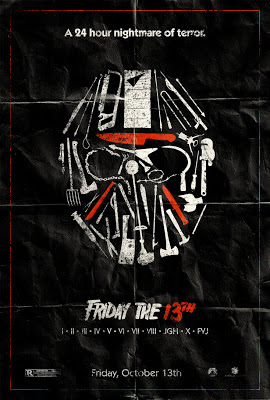 News broke earlier today that the rights for 'Friday the 13th' and its antagonist Jason Voorhees have reverted back from New Line/Warner Brothers to Paramount Studios in exchange for Chris Nolan's new film, 'Interstellar'. Now the speculation comes as to what will happen with Camp Crystal Lake. The last rumors floating around were to set the next installment during winter, and possibly have it be a found footage film. These are intriguing ideas, sure, but here are some ideas on how I think Paramount should handle the franchise they buried years ago.

While the 2009 reboot wasn't a bad film there just wasn't much balls behind it. Sure, there were trickles of what made this franchise so special to the fans, but it just felt like a watered down rip-off. The biggest downside, to me, about the '09 offering was that the kills, while vicious, weren't to the level we had seen in previous entries.

Sure, there was a call back to the sleeping bag death from 'New Blood', and the bear trap was an excellent choice of weapon, but this is JASON FUCKING VOORHEES we're talking about here. He should not be moping around in underground caverns. He should be slow walking while cracking dudes in half, crushing skulls to a pulp or some other wacky means of dispatching his victims.

For most fans, the special effects in this series are a highlight, and that was the biggest downside in the '09 remake. To Paramount, I say: don't be afraid to show the gore. You pussied out with 'New Blood' by trimming the violence, so here's your chance to make up for it.

Another downside from the '09 version was that we weren't at Camp Crystal Lake long enough. This is probably one of the most iconic locations in horror history, and all we get is a glimpse of a broken down camp. Take a note from the original film, and have a group of people trying to re-open the camp to the public. Hell, do one better and follow 'Jason Lives' with the camp being open AND in session.

This will add for huge tension with a plethora of bodies for Mr. Voorhees to mow down, and at the same time give us a chance to see humanity amongst our protagonists. There are parts in 'Jason Lives' where we see the counselors looking after and enjoying the company of the children attending camp. This adds to the character development as while they may not be the best people (pre-marital sex, drug use, drinking, etc.), it at least shows us that there are redeeming qualities. This will make their deaths that much more impactful.

While there were nods to the original series in the Platinum Dunes reboot, it just didn't really fit the cannon of the franchise. It was too mean spirited, whereas the other entries at least had a sense of fun to them; kind of like a theme park ride. Perhaps the best way to reboot the franchise is to set it in the 80s? I doubt Paramount would want to do this, but it would be a fun way to be meta about the series while still creating an original storyline.

If there's one name (outside of Sean Cunningham) that is synonymous with 'Friday the 13th', it's Kane Hodder. Kane played Jason from Part VII to Part X, and is who fans know and love as the hockey masked slasher. I have my gripes about the '09 reboot, but Derek Mears portrayed Jason rather well. What I think, and this is a long shot, is to cast both in the film. Not having dual Jasons running around, but either have Mears portray Jason again or Kane, but have BOTH in the film. It should be littered with a who's who of Friday stars, and, more importantly, show that the studio is creating a film for the fans.

If there's one thing that has been missing amongst the Friday franchise over the years, it has been Jason's arch-rival; Tommy Jarvis. Portrayed original by Corey Feldman, then John Shepherd until finally being played by Thom Mathews in 'Jason Lives'. The Tommy and Jason relationship is the equivalent of Nancy vs. Freddy. There's something to be said about a character with a history, and since 'Jason Lives', all we've had is Jason mowing down teen after teen. I mean sure, that's really what this series is about, but there is a rich history between these two that should be continued.


There are probably a dozen or so other points I would tell Paramount to take in their re-acquisition of this beloved franchise, but the clock is ticking. The deal with Warner Brothers states that within FIVE YEARS there must be another entry made, or the rights will revert. My concern is that we'll get a cookie cutter entry that doesn't really serve the series justice, but I could just be talking out of my ass.

What are your thoughts? Do you think Paramount will show this franchise love after manhandling it for decades? Leave your thoughts in the comments below!